About 4 kilometers to the west of the Hanoi center, Phu Tay Ho lies on the quiet and peaceful peninsula of ancient Nghi Tam village, West Lake, Quang An ward, Tay Ho district. It is widely regarded as the most popular and sacred destination in Hanoi, attracting a lot of travelers thanks to its glorious landscape with tranquil atmosphere. Not only is Phu Tay Ho a place of religion for the locals but it also preserves the historic values of the capital city’s thousand year-old culture. 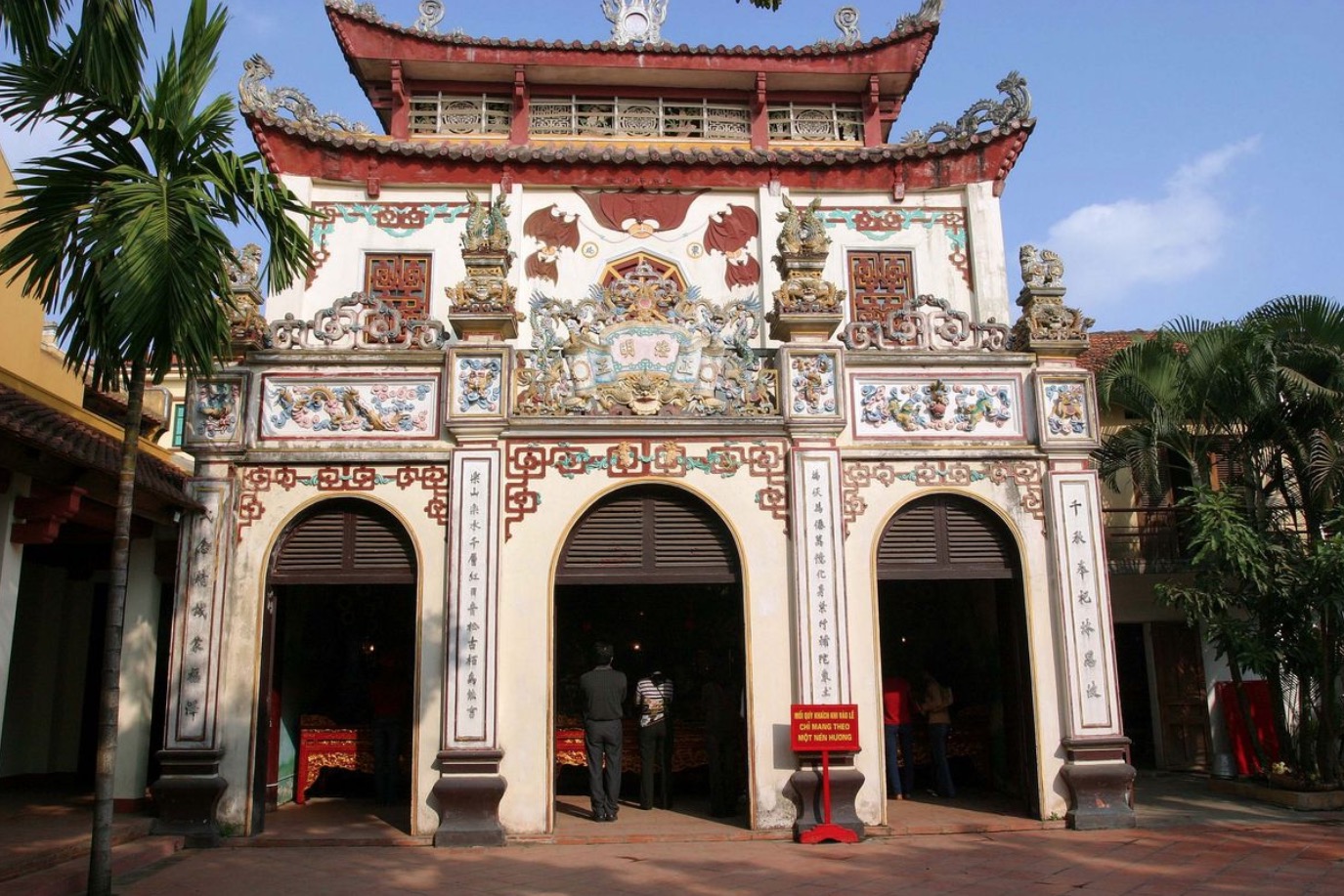 (In Vietnamese, “Phu” shares quite similar meaning with “temple” yet more specifically, used to mention the temples worshiping Mother Goddesses of Vietnam).

Phu Tay Ho was built around the 17th century, dedicated to Princess Lieu Hanh, one of four legendary figures in Vietnamese history. She is honored as a leading figure in the Mother Goddesses cult (Dao Mau - one of the main local religions in Vietnam) in which she governs the celestial realm. 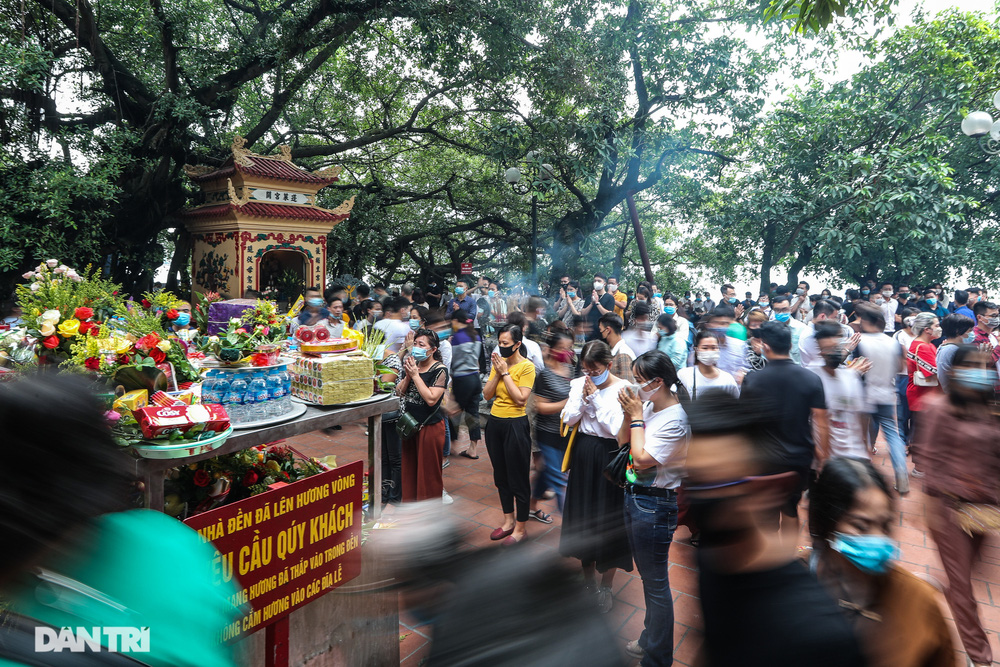 Folklore said that she was the Princess Quynh Hoa - the beloved daughter of the Jade Emperor in heaven. Due to her mistake (she broke her father's cup), she was expelled to the earth, named Lieu Hanh. 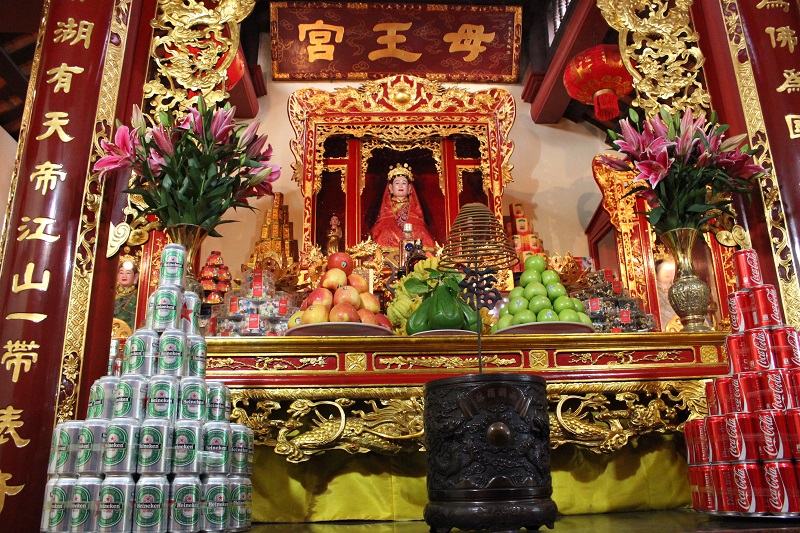 After the great journey to experience the world, she was attracted by the charming, lyrical and romantic beauty of Tay Ho then decided to settle in the middle of this peninsula. During the time she lived here, she bravely protected local people from the threatening dangers and ghosts. One day, when taking a boat trip on the lake, Phung Khac Khoan (known as Trang Bung) was destined to meet her in her stall, they promptly became close-nit. Since then, they spent time writing poetry and enjoying the natural scenery of the lake together. Yet Princess Lieu Hanh wasn’t there for a long time. According to folklore, when Phung Khac Khoan (after going to the imperial city - Hue) returned to find her, she left. To calm down the nostalgia, he and the locals set up a temple dedicated to her. That’s the beginning of Phu Tay Ho. Nowadays, the temple is under Tay Ho government’s management.

The Beauty of Structure and Architecture

One of the very first impressive features of Phu Tay Ho is the colossal three-door gate, elaborately carved with three entrances, two stories. Its charming structure is familiar with other pantheons’ of Mother Goddesses. This form of design is popular in the Northern of Vietnam, characterized by 19th century style of architecture. 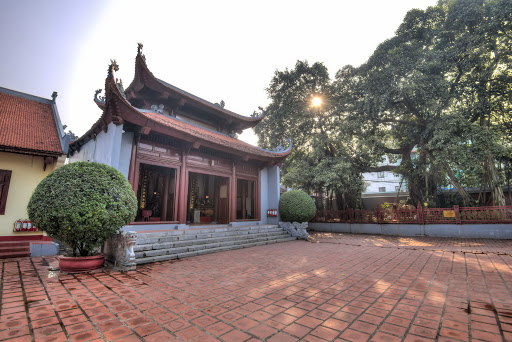 The main architecture of Phu Tay Ho is covered by 3 smaller temples of which the main one (the front house) is the largest. The Statue of Mother Goddess Lieu Hanh is in the inner palace at the back of this front house. In addition, there are also the Fang pavilion (Phuong Dinh), Son Trang Palace, Co-Floor, Cau Pagoda,...From the glorious gate right to the large door or walls, everything was designed and carved exquisitely in detail. In addition, this temple is full of antique relics including frescoes at door, votive table, royal seat, ... all of them are designed in the style of 19th century

Phu Tay Ho festival is annually held from March 3rd to 7th of Lunar Calendar, aimed at honoring Princess Lieu Hanh. Forming the major part of the festival is a goddess' palanquin parade touring from Phu Tay Ho, going through Yen Phu Street, Co Ngu Streets, Quan Thanh Street, Hang Dau Street then finishing at Nghia Lap Temple. For those feast days, the temple always is full of pilgrims and visitors who pray for health, peace and fortune. This religious festival is also a great chance to enjoy local and traditional music, dancing, or poetry contests all fueled by the carnival atmosphere.

The pilgrims and tourists can come to Phu Tay daily from the 5:00 AM to 6:00 PM (5:00PM to 9:00 PM on the 1st and 15th day of every Lunar month). This temple is also one of the most popular destinations of Hanoidians on Tet (Lunar New Year). On these occasions, Phu Tay Ho is full of the locals who visit with incense and votive offerings to pray for health, peace and fortune. For anyone who isn't supposed to pray, you can come here to relax and enjoy the magnificent landscapes by the lake.