How do you sip your tea in a cool autumn morning? And how Vietnamese appreciate their aromatic beverage you may ask, is it the same as Japanese and Chinese do?

How do you sip your tea in a cool autumn morning? And how Vietnamese appreciate their aromatic beverage you may ask, is it the same as Japanese and Chinese do? An adventurous tourist, who has Vietnam home-stay experience, can answer this question without consulting a Vietnam studying scholar. It is plain tea (unflavored or unscented tea, served with neither milk nor sugar), which is served mostly at home, in the morning, in the afternoon, in the evening, at any time, as the best refresher and a remedy to many daily common diseases.

Tea From Home To Field

Anyone interested in Vietnamese may want to know the common word Vietnamese using for “Tea”. “Trà” - as tea is often translated - is not a pure Vietnamese word. It is “Chè” that ancient Vietnamese have used for thousands of year. At present, the word “Chè” is still used in the countryside, where Chinese feudal influence was less, and that is also the place where you can find a real Vietnam tea culture. 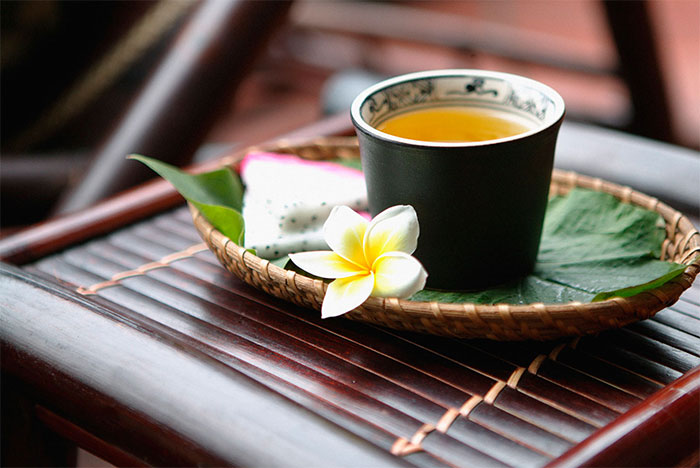 “I often infuse tea when I wake up in the early morning, when the air is wet in dew and my mind is free from daily concerns”, said Thien, a farmer in Nam Dinh, whose tea habit is typical in most of country areas in Vietnam, “this is the most peaceful time in a day of mine, when I am with only myself and sometime, I think of things that I never share with any one”.

“Me, I just love the taste of tea shaking in my mouth. I can not stand if I am stopped from having some cups of tea in the morning. I am addicted to it”, said an old teacher in the same village with Thien, “I can go without food all day but not tea”.

Experiencing a day with country people, it is easy to see they drink tea all day, when relaxing talking, working, even when eating. Farmers often carry with them big pots of green tea to the field for slaking their thirst during working and according to the farmers, for keeping their health from common diseases such as influenza, diarrhea and parasite.

Every household in the countryside owns at least a tea-set, yet if you see them drink tea from a bowl, do not be surprised and learn that is the most interesting thing about Vietnamese tea culture, especially applied for green tea, which is largely consumed in the countryside.

Vietnamese drink tea whenever they can, appreciating its bitter taste, considering it an indispensable pleasure and that is the way they show their hospitality to guests as well. It is said that observing the way the host making tea to welcome guests, the importance of the guests can be predicted. Do they wash the tea-set carefully before infusing tea? Do they check the standard heat of the water? If they do, you may be considered guests of honor.

Finding how complicated Japanese tea ceremony is, the contrast can be found in Vietnam tea culture, “Politic things as well as important businesses can be heard in a Chinese tea talks, it is not the case in Vietnam. Common things such as the weather condition, harvest, pesticide, wife problems and social issues are mentioned in a simple Vietnam tea talks”, said Dr. Cung Khac Luoc, the most renowned calligrapher in Vietnam.

The biggest difference between Vietnam tea culture and other regional countries is that Vietnamese appreciate plain tea, which is supposed to show tea’s real beauty. Cao Bá Quát, a mighty freedom fighter, a famous poet in 19th century has created a precious poem in which a unique Vietnam tea drinking culture is praised. It can be generally translated as following:

“Do not choose friends for their appearance, otherwise the friend essence can be mistaken. Do not drink flower scented tea, otherwise the real tea fragrant will be lost”.

Different from Japanese, especially Chinese, whose tea cultures are quite complicated, mixed tea and herbal tea are attached much importance, Vietnamese love the down-to-earth taste of plain tea. Pure green tea is a prime example for this tea feature of Vietnam. All needed for a whole day healthy refresher is green tea leaves and boiled water. The tea favorite bitterness that later turns into romantic sweetness in month is all Vietnamese need from a sip of tea.

“There are plenty of tea types in Vietnam nowadays such as various flower scented teas, herbal tea, yet historically and culturally, they are imported tea”, said Dr. Cung Khac Luoc, “Vietnamese also do not find the necessity for a solemn tea ceremony, since to Vietnamese, tea is too close to their daily life, like pure water they drink and air they breathe”.

However, like Japanese and Chinese, tea (green tea excluded) is sipped, in order to be appreciated gradually the fragrant of the tea with marvelous sweet mixed bitter taste that will long last even half an hour after sipping the tea cup.