As an antiphonal singing between men and women, QuanHọ is an artistic bridge between sensitive souls and young hearts. Singing Quan Ho is an interesting cultural activity enhancing social bonds between villages, a great way for young adults to get acquainted, expressing emotions and sending message of love.

As an antiphonal singing between men and women, Quan Họ is an artistic bridge between sensitive souls and young hearts. Singing Quan Ho is an interesting cultural activity enhancing social bonds between villages, a great way for young adults to get acquainted, expressing emotions and sending message of love.

Soft, gentle and romantic are the best words for this kind of repartee singing. These characteristic are not only expressed through lyric or melody of Quan Họ songs, but also the way of singing, costume and gesture of participants. To some extends, Quan Họ can be seen as the “vocal Waltz” in which clever movements are replaced by sophisticated singing voices. 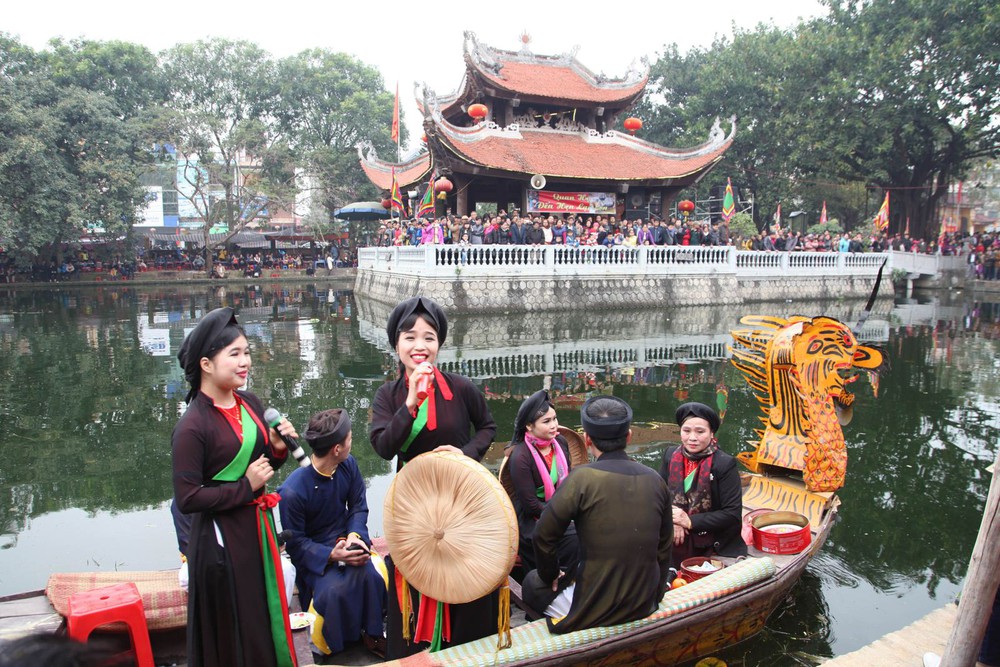 Most of Quan Họ songs have subject of love and express sentimental desire in a gentle way through soft, sweet melody and modest but implicate lyric. Liền anh(singing man) and Liền chị (singing women)take turn singing in a form of challenge- responsetosend and receive sentiment. Commonly, a pair of women (liền chị) start with a song called “câu ra” (challenging phrase), and a pair of men (liền anh) in opposing team have to response by another song called “câu đối” (matched phrase), which has the melody and lyric compatible with the challenge phrase’s. After that, it is the men’s turn to challenge the women with another song that is totally different from the previous ones.

Sometimes, “liền anh” and “liền chị” sing for two or three days with the number of songs performed up to hundreds.It usually takes one person ten years at least to learn by heart a number of Quan Ho songs to perform for such a long time. Moreover, this kind of repartee singing requires creativeness and quick response of participants. In many cases, “liền anh” or “liền chị” challenges the opposing team with “bài độc” (unique song, killer song) composed by themselves, unknown previously. Sometimes, the opposing team can not response immediately and two teams make an appointment in the next spring festival, or another occasion to meet each other again and continue to challenge and response.

As a game involving the two sexes, Quan Họ music and lyric is mainly about love affair, praising love, delicately courting each other. That is the precious place for boys and girls show their best sophistication to the opposite sex. The boys seem to be the most elegant ever and the girls are at the prettiest.

Do some of them get married and live happy ever after? The answer is a no.

This kind of antiphonal singing between men and women should have been a catalyst for love, that leading to marriage.Manytypes of repartee folk singing in Vietnam like “hát ví”, “hát giặm”, hát trống quân”can be regarded as good examples. However, Quan Họ is a rare exception.

Traditionally,marriage between “liền anh” and ‘liền chị”, especially who came from villages bonded together were forbidden.This unofficial law used to be an ethical standard in Quan Họ for a long time, and caused many heart-breaks.

Many culture experts suppose that this strict rule aims to protect the special artistic bond between “liềnanh”, “liềnchị”, as well as the beauty of QuanHọ singing. As it is said people can only sing beautifully, soulfully when he and she are strongly in love; once getting married, daily life with many burdens surely makes the love fade away and the singing becomes less attractive and emotional. If “liềnanh” and “liềnchị” fall in love with each other, they can only keep the sentiment inside and meet each other several times per year to show their feelings and desires through Quan Ho singing. The distance and long time waiting make the love much more strong and their singing voice always full of emotions.

An Antiphonal Singing Form Between Opposite Sexes

“Liền anh” and “liền chị” have to spend ten year or more to learn by heart hundreds of Quan Ho songs before able to perform in festival or singing session. Moreover, Quan Ho requires a special repartee singing between two pairs (not duo or two groups). According to LêCần, one renowned Quan Ho artist, who has been stick to Quan Ho for 50 years, it takes one a decade or more to find out one partner who has compatible voice, appearance, and practice together to become a perfect pair. It also takes a long time to find out a dream opposing pair, who has commensurate talent. Maybe the ancient people thought that it would be a huge waste to let marriage life interfere in or even ruin the golden singing that contains a lot of time and efforts. The strict rule is supposed to be an effective way to protect the endless love and perfect singing.

Will Quan Ho be less poetic without the ancient rule? It is still a controversial topic. But the disappearance of the strict rule brings the happy ending to many love stories of “liền anh” and “liền chị” for sure.