The National Emblem of Vietnam is the official symbol that has been used by the Vietnamese government since 1955. The original version of the present emblem had been the allegory of the Democratic Republic of Vietnam, and after the Reunification in 1975, it became the National Emblem of Vietnam. This pictorial symbol is used officially in government documents, monetary items such as coins, notes and to represent the nation in the international community. 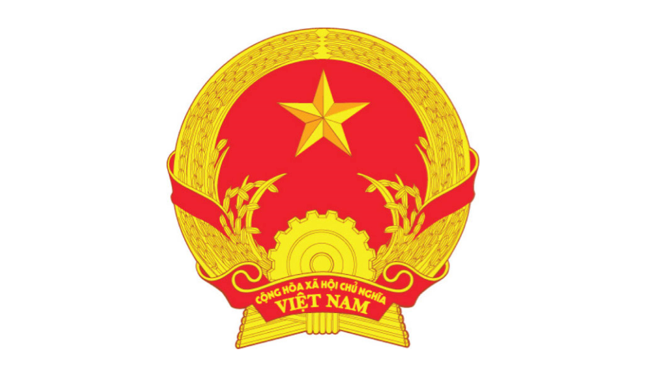 The National Emblem of Vietnam contains several common symbols of Vietnamese society and economy with a similar concept to the national flag and anthem. It has a round shape with main red color in the background. The big star on the top refers to the Socialist regime led by the Communist Party in Vietnam. This star also recalls the epic history of the country and the solidarity of the Vietnamese people, and also shows the bright future of the society under the leadership of the Party.

Moreover, the symbol is covered by two rice-water shoots which represent Vietnamese agriculture. With a gear for industrialization embedded, the allegory further emphasizes the essential combination of these two zones in the Vietnam's development process. Finally, at the bottom of the emblem is the title “The Socialist Republic of Vietnam” in Vietnamese as the name and political regime of this nation. All these items are in yellow as this color is the representative color of Vietnamese society.