Quan Ho Costume - An Art Of Itself

While Tuồng characters take on the stage, they make a screaming statement with exciting colorful masks and flashy, attention-grabbing dresses. On the contrary, the art of Quan Họ will not be complete without the much lower profile multi-layered dress, the iconic flat hat and the unmistakable black umbrella.

Quan Họ is, as most have known, a repartee singing between members of the opposite sexes. Its fascinating quality does not come only in the verses, but also in the portrayal of beauty in the form of the traditional dresses. As time progresses, many changes are made to the original costumes, but their overall meaning remains steadfast.

Quan Họ outfits are much more down to Earth and less vibrant in general. While being a festival type of dress, it keeps with the tradition of a society that favors the lower more discreet tones. Being an art devoted to love, Quan Họ costume emphasizes the beauty of each individual, meanwhile stays faithful to the harmonious combination of both man and woman.

The Costume Of Female Artists

One thing for certain, liền chị today dresses a more modern outfit than they do hundreds of years ago, but some staples remain. The original costume is defined with nón quai thao, khăn mỏ quạ, the colorful multi-layered dress and the sometime less noticed flip-flops with up-curving tip. 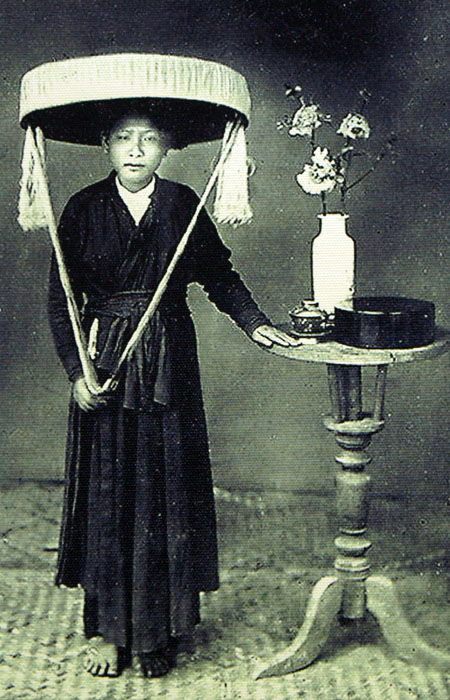 Costume of Ladies singing Quan Ho in the old days

Nón quai thao, the nowhere-else-to-be-seen flat hat, is weaved from dried palm leaves, with its strap made of silk, much like the conical hat. But with a much larger diameter, an empty space between the upper and lower edges, a bowl that holds the head in place, the weight and the unbalance makes the thing more of a decorative item than having any meaningful real life purpose.

While the conical hat is a peasant must-have, nón quai thao is definitely more aristocrat and meant to show off the nobility of the wearer. It also has a secret item, the small mirror that helps with a quick make-up. As one comes to think about it, the shy and conservative Northerners have a good reason to hide away from the wandering eyes when they need a quick brush on the cheek.

Being a “hat”, it comes as a surprise to many that the woman seldom puts nón quai thao on her head. Instead, she often holds it close to the body like a shield and sometime hides her face behind, perhaps from a lover getting too intimate at times?

Another staple headwear of the woman (and this time it does indeed stay on the head) is the black scarf. It is folded in a unique way to resemble a crow’s beak, hence the name mỏ quạ. In fact, liền chị braids her long hair, wraps it with a piece of cloth, and coils around the head. The scarf is then tightened to cover the back of the head and render the head a close resemble of a blossoming flower, albeit the color.

Moving to more vibrancy, the layered dress of the woman brings about a conservative-appropriately discreet yet at the same time more eye-catching appearance. Colorful belts of different colors were well used to accent the woman’s figure. 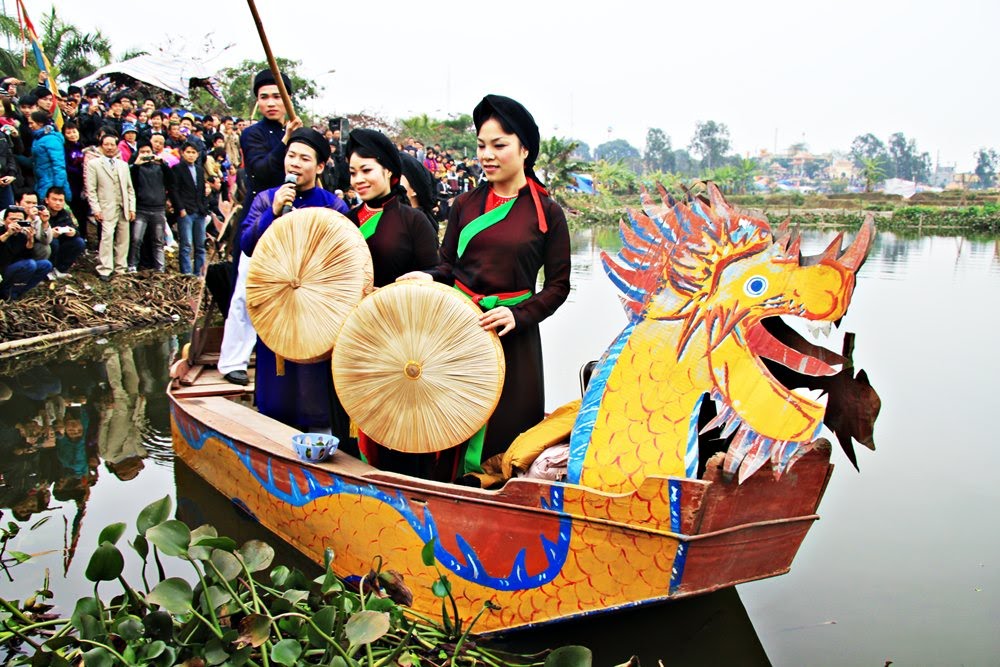 However, the so called mớ ba mớ bảy dress has not stayed same over time. According to Lê Cần, one of the most renowned Quan Họ artists in Vietnam, who have been working on the art for 50 years, the costume in the old days was simpler. The woman used to wear a brown brassiere, a white round-necked shirt, a below-knee black skirt and only one brown long dress with two front laps tightened as the belt.

Often, the dress of liền chị only buttons at the side, while the ones from the armpit to the neck are left open to reveal three layers of three different colors, which bring about a unique twist but still decent appearance for the lady.

The long dresses these days are tailored nicely to fit the woman’s body and accent her figure. The combination of the red silk layer inside and the black gossamer outside makes an elegant and subtle brown, which is much more attractive than the plain colors of the old dress.

The Costume Of Male Artists

The head turban khăn xếp, the long dresses, and the iconic black umbrella make up the core of a typical costume for liền anh.

Traditionally, the man makes a high bun from his long hair, and coils a scarf around his head. Today, a more modern short hair replaces the traditional long one, and so liền anh wears a different headwear instead of the old khăn nhiễu that once wraps his long hair. 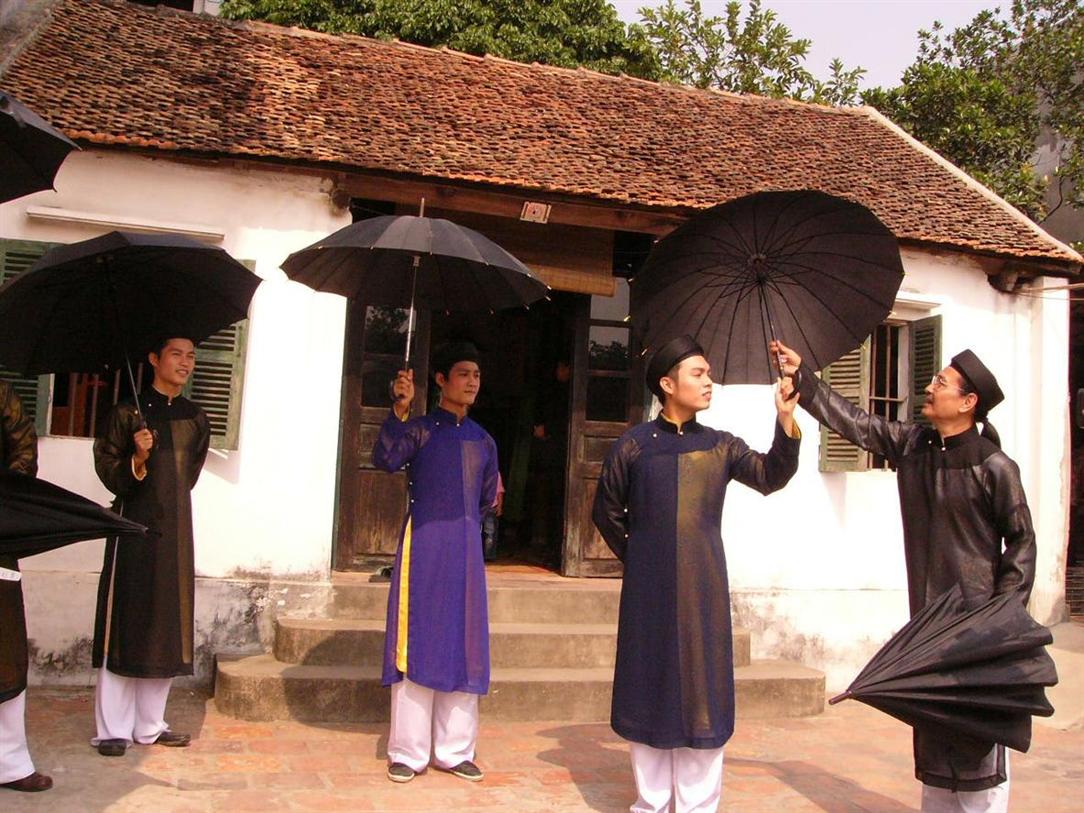 Nowadays, besides the two basic colors: black and white, more colors have been added to the long dresses to make them less dull and more suitable for modern performance.

In addition, the man always takes along a black umbrella. Like that of the woman, the umbrella is not only to prevent rain, but it also acts as a fashion accessory. This has been a staple of the man’s costume for a long time and is likely there to stay.

One can easily recognize that dominance of dark colors in quan họ costumes. However, upon closer inspection, it will soon become obvious that the dress comprises many layers of different colors overlapping each others. The blend of warm and bright colors (crimson, pink-lotus, yellowish or green) of the inner layers and dark colors of the outer ones brings subtle charm to the dress. 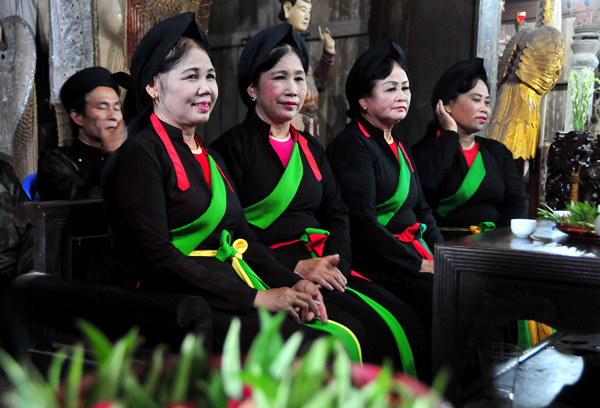 Unlike many other costumes of different performance arts, the long dress of quan họ, with its dominating elegant brown somehow reflects an important cultural aspect of the people living in the Red River delta, who prefer modesty and discreetness.

For they exist as a testament to the creativity of the people and the proliferation of the vocal arts of the land!