In Vietnam, tea is said to appear in almost every social activities: from wedding, birthday to anniversary and ritual ceremonies. A cup of hot tea in the early morning after breakfast, some iced tea at “quán cóc” - the roadside-make-shift shop while waiting for a friend, or a whole day chilling out in a tea-house; that is the way tea penetrates into Vietnamese’ daily life.

A Brief History Of Tea In Vietnam

Let’s spend a few minutes on the time machine traveling back to the past, to observe Vietnamese’ tea drinking habits and apprehend the first days of tea appreciation’s art. 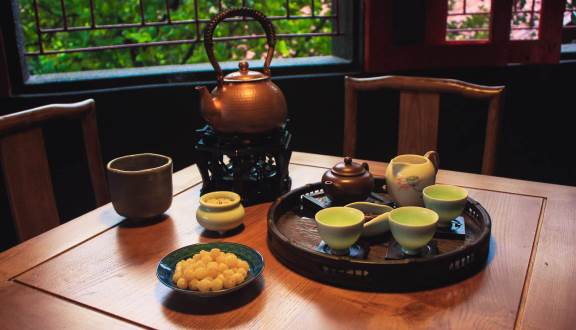 Tea and tea drinking an art

In the period of 13th to 15th century, Vietnamese believed that tea assumed many philosophical values, since it was a source of spiritual purity. Reading book and consuming tea had been chosen by many Vietnamese scholars as a means to escape from the petty concerns of chaotic life, to achieve enlightenment and peace of mind.

Drinking tea was thought to help improving one’s character, polishing one’s manner, and assessing one’s personality. People who drank concentrated tea were regarded to have fine manners, while tea artisans with the ability to pour tea into bowls arranged in a circle without spilling a drop were admired by their peers.

Vietnamese tea drinking style is very diverse with no fixed standard and creatively conveys the depth of language among people. Through times, tea gradually has its own place in everyday lives of people, aristocrats and the ordinary, living in the city and in the countryside alike.

Besides special celebrations such as wedding, funeral or other traditional rituals, tea is served several times each day in every Vietnamese home. Waking up in the morning, many elderlies would love to have a cup of hot green tea before starting a new day in the hope of refreshment and sound of mind. Patio or garden in the backyard is among the most favorite places for tea appreciating for its closeness to nature, as some fresh air can give extra flavor to the tea.

Vietnamese believe that tea binds people together and express hospitality; hence people often invite their friends or neighbors round for a chat over a cup of tea. Tea is also used to calm down heated quarrels by diluting one’s anger. Moreover, consuming tea after meals, especially dinner, is also a habit that is loved by many people, when family members can gather round, talking about what they have done during the day.

Tea On The Streets

Not only at home but also on the street do Vietnamese drink tea. Tea is sold commonly in “quán cóc” - or street vendors - which can easily be found in front the gate of bus terminals, train stations, schools, offices or even in some corners in quiet alleys. “Quán cóc” with hot or iced green tea is an interesting piece of Vietnamese street culture, where people, especially workers and students, often come to have some rest in short breaks of utterly exhausted working time, waiting for friends or for picking up children after school. “Quán cóc” connects people, from strangers they become friends, sharing stories and hearing latest news happening while smoking cigarettes or having some peanut candy.

In recent time, Hanoi youngsters have found out a new trend: gathering around and chill out at new type of “quán cóc” called “trà chanh”, or “tea with fresh lemon”. A few plastic short-legged stools, a small dish of roasted sunflower seed, and certainly, a glass of “trà chanh” for each; those are enough for everybody to have a great time at a very low price. “Trà chanh” is so popular that it even becomes a slang used widely by youngsters referring to “hang out”. The most boisterous and exciting place to drink “trà chanh” is at the area around Saint Joseph Cathedral, where one will get a chance to have a close approach to daily life of young Hanoians, listening to their talks about all the hottest events, fashion vague, technology and any gossips that one can think of!

Nowadays, with the rising income and living standard, people have a tendency to learn more about the traditions and culture, to recall the nostalgia feeling of the good old days, which explains why more and more tea-houses appearing in Vietnam recently, diversely in styles, from Chinese, Japanese, to traditional Vietnamese tea-house.

Distinctive in architecture, those teahouses are attractive to ones who wish to enjoy their tea in a unique space designed exclusively for tea buffs and tea lovers. In the room decorated like an old house in Vietnamese countryside, customers take their time, sitting under the eaves, and letting the slender smoke from the teapot easing all the troubles in life. At teahouse, people are free to choose whatever kind of tea to consume, from the traditional green tea, scented tea, herbal tea, to exotic imported tea, depending on the tea-house’s style; and spend hours conversing with their peers about issues regarding tea. 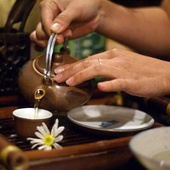 For Vietnamese, tea is not only a favorite refreshment but also an effective cure for daily common diseases.

How do you sip your tea in a cool autumn morning? And how Vietnamese appreciate their aromatic beverage you may ask, is it the same as Japanese and Chinese do?