Pho is no doubt the most famous one among all Vietnamese traditional cuisines. However, there is not only one but a whole spectrum of different kinds of Pho in Vietnam, one of which is Sour Pho (Pho Chua). Originally from Lang Son, this special dish is the result of the interaction between many cultures of the country.

This specialty is cooked in a very complicated yet interesting way. To savor a bowl of Sour Pho, you have to eat it slowly to enjoy both its taste and smell. Nowadays, even though Sour Pho appears in many restaurants thorough the Northern part of Vietnam, the most delicious one that you can found must be in That Khe, Lang Son. 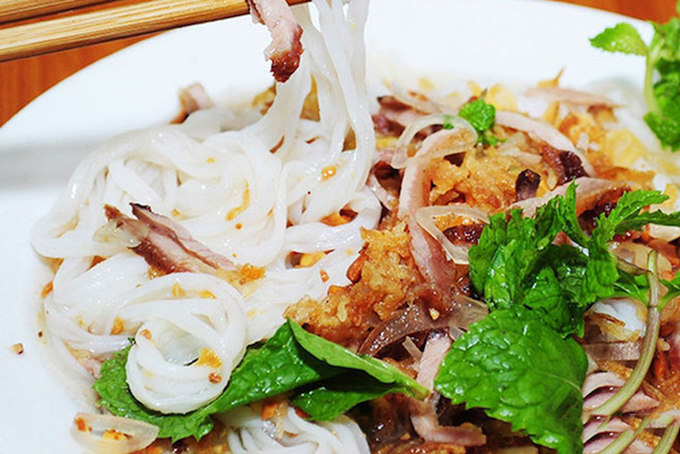 The dish has two components: the dried ingredients and the soup. The first dried ingredient is the noodle. Unlike other kinds of Pho noodle, it has a relatively small size and tastes really chewy. Potatoes are another important ingredient; they are sliced and fried in boiling oil until they become crispy. The others are pig’s liver and pork side, which are also fried. The last dried ingredient is roast duck, but the cook usually gets it from famous restaurants in That Khe to save the time.

The second component of Sour Pho, the soup, is made solely from garlic, vinegar and sugar. Sometime you might see people adding seasoning powder into this soup. However, the core element of the soup is the juice inside the roast duck, which has both the buttery flavor of duck fat, and the fragrance of the spices added in the roasting process.

All of these ingredients are prepared beforehand by the cook. Whenever an order comes, he will mix them up in such a skillful way that maintain a perfect ratio between soup and noodle so that the ingredients absorb all the spice. The mixing process, though the last step, can be considered as the most important step.

However, before serving, the cook still has one last thing to do: decoration. Artistically, he adds crumble peanuts, fresh herbs, veggies, fried garlic and sliced sausages onto the already-tempting bowl of Pho. On top of everything, the cook dust a spice called Xung Xang, a unique specialty of That Khe. Each of the eaters can add limes, chilies or spices according to his personal preference.

Sour Pho is most popular during summer and autumn. It is considered as the pride of Lang Son people. As a result, it is always served when a special guest visit a Lang Son family. 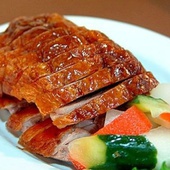 Roast Pork is not only a speciality of Lang Son but also an inevitable gift between the two families in a wedding of the Tay (and Nung) ethnic group. 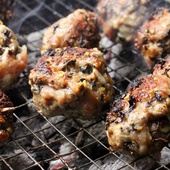 Whenever it comes to Vietnamese meatballs, people usually think of the so-called sour meatballs in Thanh Hoa or the tasty fried meatballs on Hang Bong St, Hanoi. However, the Grilled Meatballs in Lang Son could still leave a lasting impression.