One of the five famous Assembly Halls Hoi An, Fukien Assembly Hall was erected around 1690 to function as a place for the Chinese ethnic group from Fukien, China to socialize and worship.

Fujian (Phuc Kien) Assembly Hall was built around 1690 and functions as a traditional assembly hall for the Chinese ethnic group from Fujian, China to socialise, but later was transformed into a temple dedicated to their deity named Thien Hau – the goddess of sea who protects sailors from danger. As told by the preceding generations, the Chinese in Hoi An decided to build that temple to worship the statue of the goddess which was found on Hoi An Beach in 1697. Probably the most prominent amongst 5 Assembly Halls in the town, today Fujian Assembly Hall is located in 46 Tran Phu St. 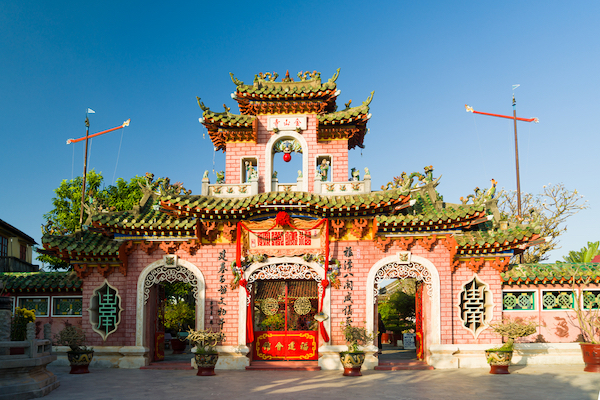 Fujian Assembly Hall bears all the fundamental features in structure of a Chinese Assembly Hall. Its ornate gate and colourful courtyard with fountains make the temple very photogenic. The main hall is the biggest room, where lies a shrine and many delicate-carved dragons. Behind the central altar are the God of Properity and the figures of the goddess of fertility, three fairies and twelve midwives (who are said to teach newborns such skills as sucking, smiling, etc.). Hence, childless couples often visit this temple to pray for children.

Not only does the temple concentrate on the worshipping of Goddess Thien Hau but also on the majestic beauty and the power of other influential gods and goddesses in the Fujian people’s belief, reflected in several murals, lacquered boards and paintings, etc. Throughout the temple, there are a plethora of statues, bronze drums, bronze bells and horizontal lacquered board engraved with Chinese characters. The whole combination and arrangement of every element in the hall tend to imply the Chinese philosophy of happiness.

In addition to its architecture, nowadays its many events and activities to celebrate Chinese’s festivals make the Fukien Assembly Hall a wonderful destination for visitors from both inside and outside of Vietnam.