On the morning of March 26, the Da Nang’s People Committee organized press conference to sign on sponsorship contracts, and officially announce detailed information about activities to be held in DIFC 2013.

On the morning of March 26, the Da Nang’s People Committee organized press conference to sign on sponsorship contracts, and officially announce detailed information about activities to be held in DIFC 2013.

The Da Nang International Competition has been being organized for 5 consecutive years from 2008 to 2012, which attracts millions tourists and TC viewers and is becoming one of the most awaiting events of the year in Da Nang specifically, and all Vietnam in general.

In 2013, the 6th competition comes back with its new theme “The love with Han River” on April 29 and 30. This year competition welcomes numerous worlds’ champions coming from Russia, Italy, Japan, America and Vietnam.

During the event time, tourists might find enjoyment in a variety of activities such as food exhibition, light festival, flower boat parade on Han River, sea sport on famous beaches of Da Nang and multiple art and music shows, etc.

Da Nang planned to build three differentiated sectors of scaffolding, in which Sector A and B right in front of the main stage may serve 19,500 audiences, while Sector C has17,700 seats. Ticket price for Sector A and B is expected to be VND400,000 (US$20)/person/night, while Sector C is divided into C1, C2 and C3 with the prices fall between VND300,000 (US$15) and VND200,000 (US$10). Additionally, audience might book special seats on cruise ships barking on the harbor to enjoy the show from another angle, with the price around VND300,000 (US$15)/person/night. 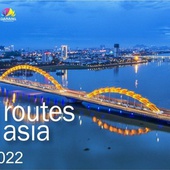 Routes Asia 2022 To Be Hosted By Da Nang

On October 11, the World Routes in Italy announced that the 16th Asian route development forum will be organized in Da Nang city on 6-8 June 2022 with the host of Da Nang People’s Committee, Department of Tourism, and IPP Travel Retail.

The International Culture and Food Day in Da Nang 2013