On the Gianh River valley, there is a fishing village whose most inhabitants originally come from Xuan Hoi village. They immigrated there with their children on the fishing boats, which are their means of livelihood and their house.  Even though these groups of boats could diverge really quickly, they could gather rapidly too, depending on the schedule of the tie, the season and the location.

In the past, when they had no place to reside, the lives of the fishermen on Gianh River were extremely hard. However, their floating lives could not prevent them from showing their gratitude towards the ancestors. Every year when the spring came, these fishermen came back to Xuan Hoi village to visit the graves and contribute to the family fund, before getting back on their boat and heading a thousand different directions.

It is said that one day, the fishermen caught a huge whale which satisfied the king. Realizing their hard lives, the king gave them the name “The Gods of South Sea” and allotted a land in Bo Khe Village to these hardworking people.  Called Thanh Ha Hamlet, this land officially ended their floating and unstable life. However, every year, the fishermen still get back to their old village in Xuan Hoi and organize a festival to remind themselves of their origin. In contrast with other villages where people only prepare fruits and sticky rice for festival, the fishermen also prepare pork, fish and sweet to celebrate their special event of the year.

On the full moon night of the 3rd month of the year, all the boats will come back to the old place and form a giant raft on the river. An altar is carefully placed on the raft, which has become not only the worshiping hall but also the meeting place of people. This floating “temple” lacks of nothing: it has all the flags, fans, bells, drums, etc. that enable the leaders of the village to pray and worship. It has been long decided that this festival is to be hold in 2 nights and 1 day. The first night and the following day are to worship the ancestors who start the fishing job. On the following afternoon, people worship and pray for the wandering spirits until midnight.

The beauty and the distinction of this festival are that only the members of the old village can participate. Besides, all the ceremonies are organized in the middle of the river. No one from the land can join the event, but many boats from adjacent regions come to watch the festival, making it like a huge meeting of all the boats and ships on Gianh River! 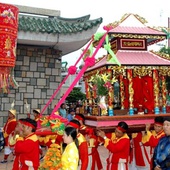 After the Tet Holiday of the Kinh ethnic people, on the first full moon night of the year, the Ma Coong Ethnic Group will organize the Drum Festival.