Locals attach great importance to meals during the day, especially breakfast. Afternoon tea and midnight snack are unique characteristics of the locals. That is also the reason for the constant vibrancy of Hanoi’s restaurants all day round. It can be said that: “in Hanoi, you will never be hungry”.

Neither having a gorgeous look nor modern amenities, these restaurants have gained reputation for many years for special flavors that cannot be ‘imitated’.

Hanoians are renowned for their sophisticated eating habit that focuses on the aesthetics of the food and the elegant way to savor it. Despite many changes in lifestyles resulting from the influences of modern urban life, this eating habit of Hanoians has remained intact through many generations.

It’s also very interesting how Hanoi people eat. They prefer street stalls and local food carts to luxury restaurants. However, this doesn’t mean they are easy to eat anything. The long-term existence and continuous development of long-standing restaurants in Hanoi is a clear evidence for the sustainability of Hanoi people’s inherent culinary tradition. There are even some addresses that were opened over two decades but still packed with customers every day.

Over the time, ‘bun cha’ remains a simple dish imbued with the flavor of Northern Vietnamese villages. It is a must for visitors to Hanoi to this traditional specialty at the right address that features the authentic taste. Despite being an easy-to-make dish with simple ingredients including grilled pork meat and sauce, to marinate and grilled a delicious batch of meat is a piece of art. And only gourmets can create an authentic sweet and salty sauce in Northern style. ‘Bun cha Hang Quat’ was born for a long time and has always been busy with throngs of guests. Originally, there were only a few tables nestled close to the wall. So far, the number of tables has increased and even spread over the alley No. 74. The best way to see how Hanoians eat ‘bun cha’ is come here and try once. 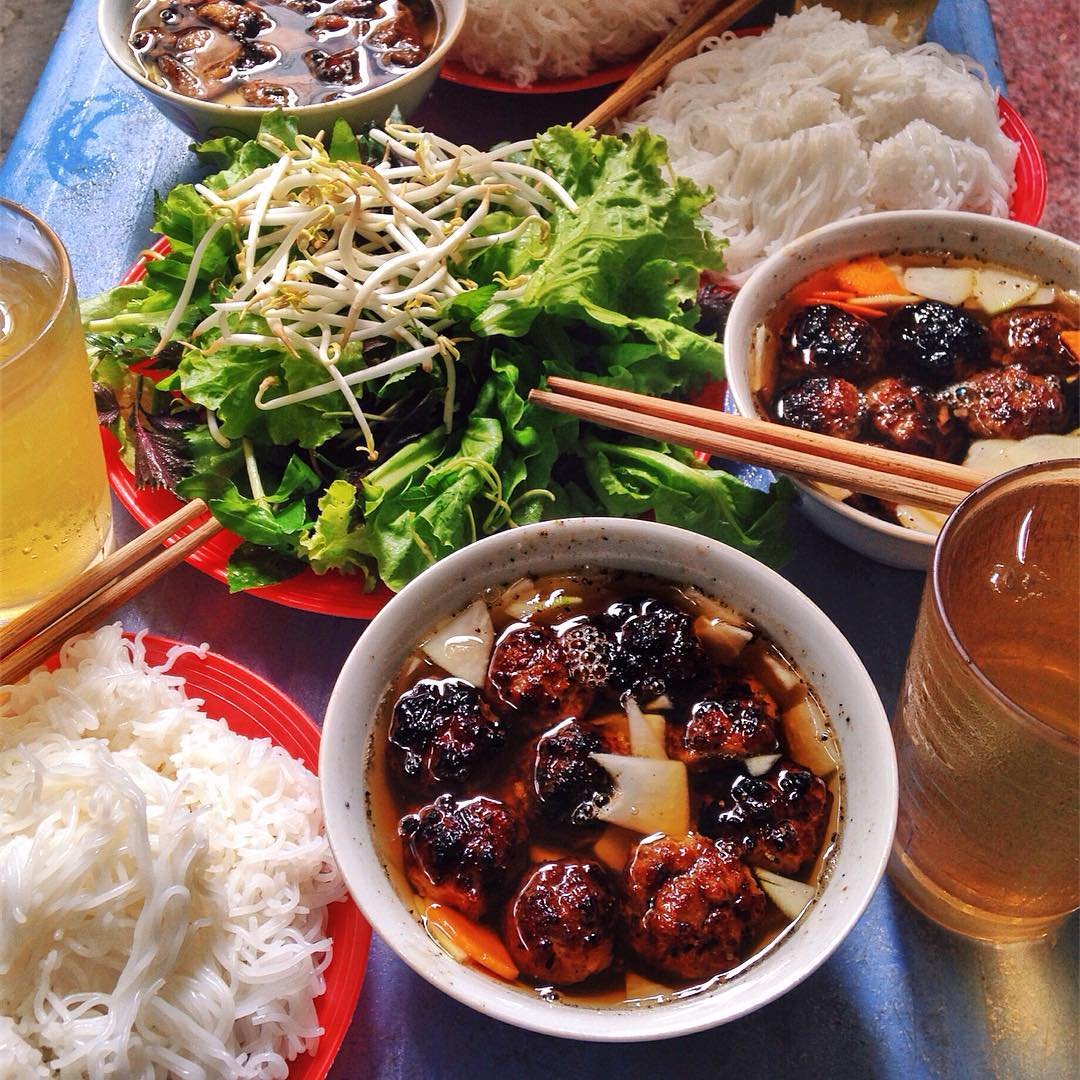 Narrow streets and alleys around Dong Xuan Market are best known for a real food strip in the Old Quarter. An array of food stalls selling various kinds of street food such as ‘hu tiu’ (Southern noodle soup) and ‘banh gio’ (pyramid rice dumpling) here are always crowed. Amongst those, ‘bun oc’ (snail noodle soup) is perhaps the most favorite one adhering to the eating habit of Hanoi people. A steaming hot bowl of snail noodle soup topped with fried tofu in old-fashioned style is irresistible to any eaters. ‘Bun oc ngo cho Dong Xuan’ has features the best flavor in Hanoi so far. 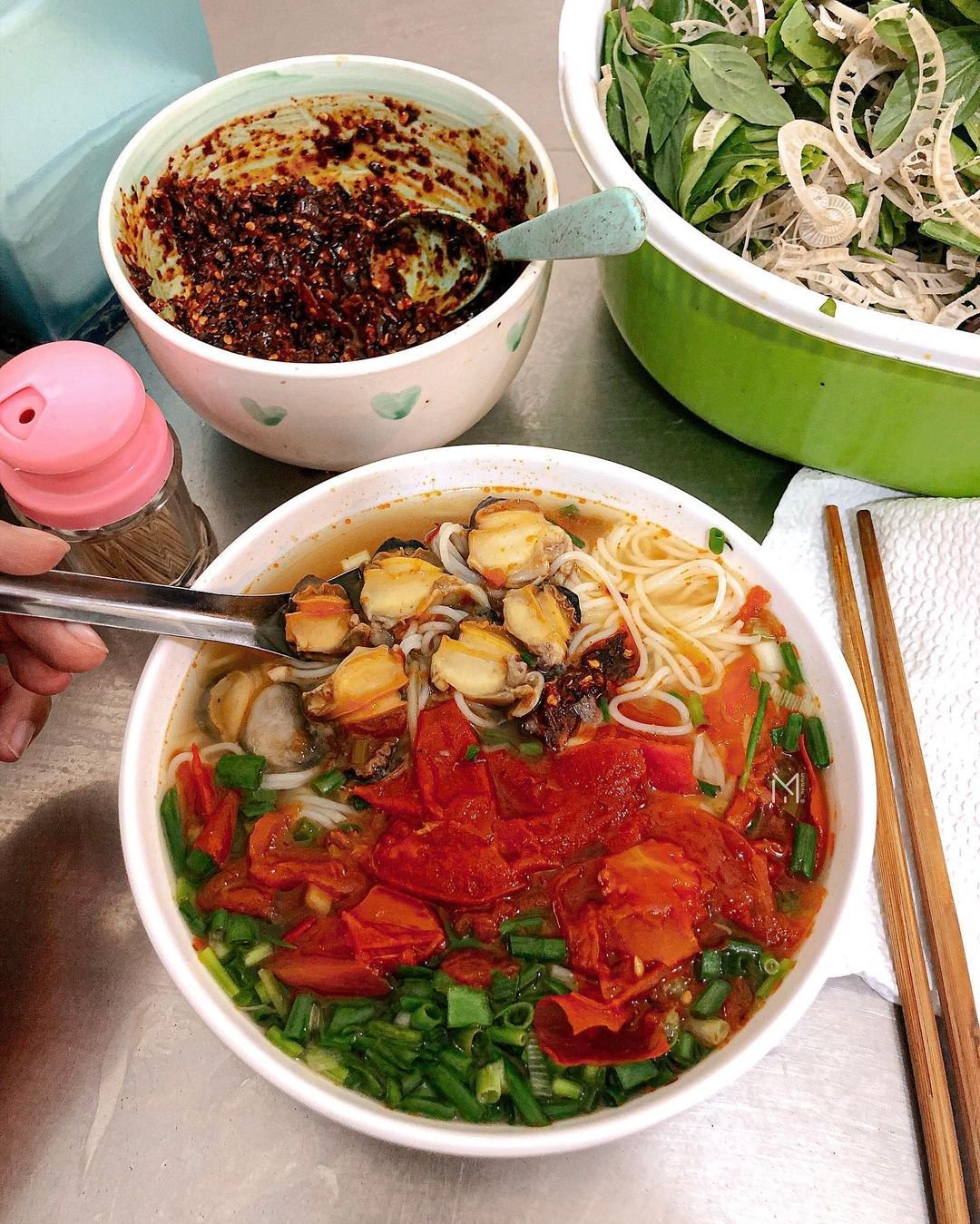 The chicken glass noodle soup stall on Hang Buom Street is a little bit run-down but always filled with guests. The key point that draws visitors is surprisingly the broth. Spread over the sidewalk, therefore, people come to eat there always have to keep an eye on their motorbikes parking right off the road. While waiting for a tasty bowl of ‘mien ga’, you can enjoy some special crispy breadsticks. 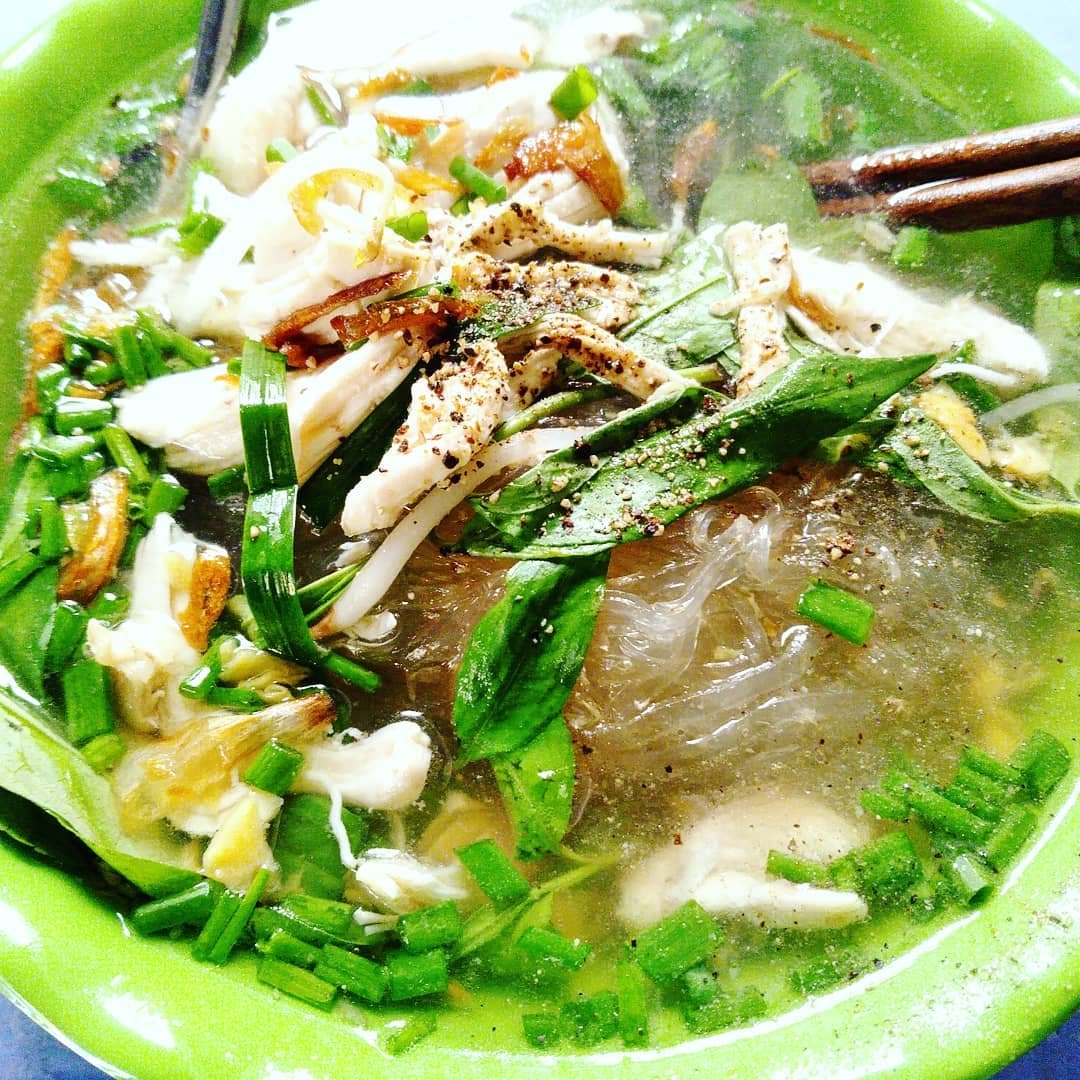 In regard to ‘pho’, ‘pho Bat Dan’ (Bat Dan noodle soup) immediately springs to mind as the most quintessential dish of Northern cuisine. Through many ups and downs of the history, Bat Dan noodle soup has remained its dominance. Until now, it’s easy to come across the image of crowds of guests queuing with an empty bowl on their hands for being served outside the restaurant. This kind of subsidy selling style is stilled applied by overcrowded shops. 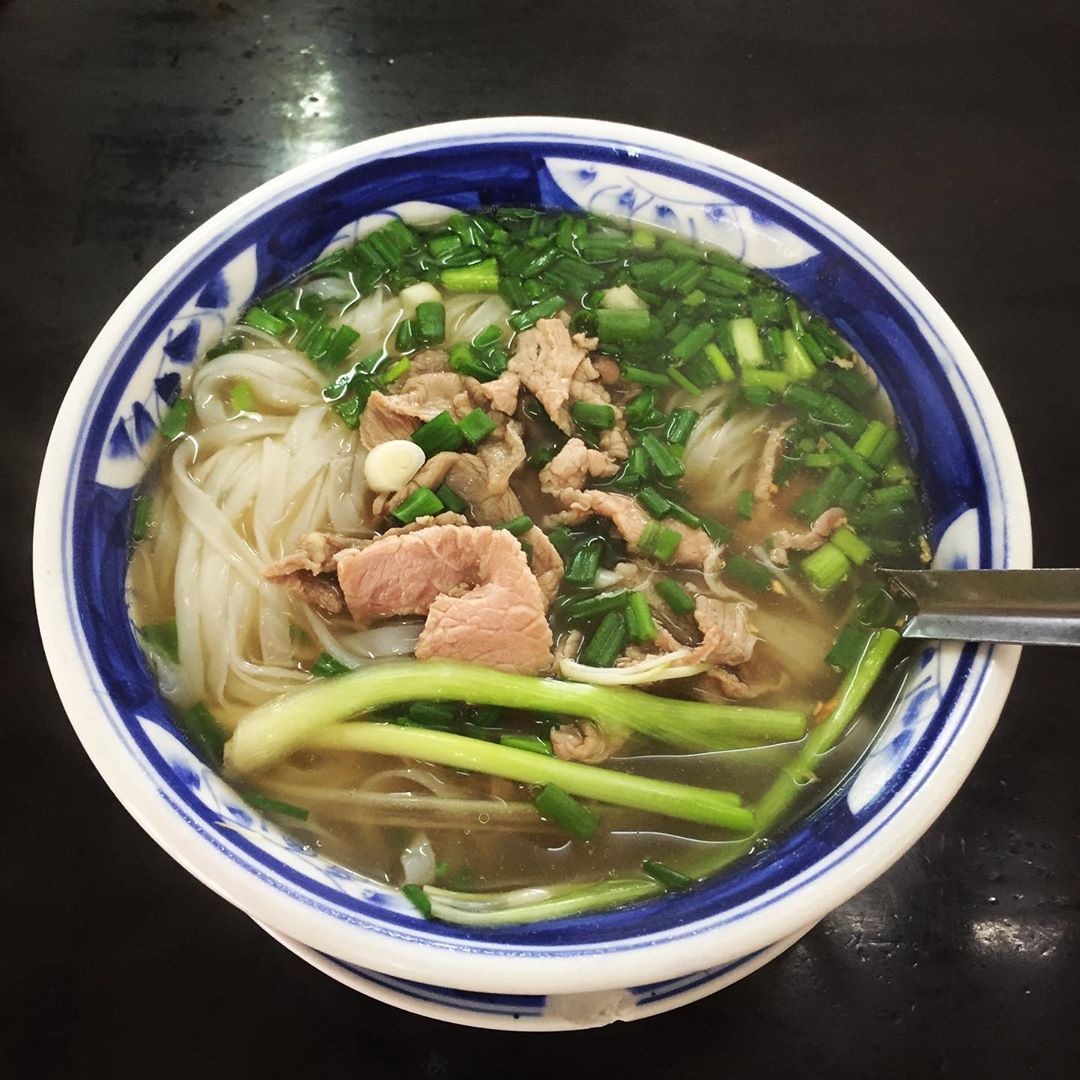 Opened in 1979, ‘pho’ Thin boasts one of the best noodle soup brands in Hanoi. Together ‘pho’ Bat Ban, ‘pho’ Thin has contributed to the Vietnamese ‘pho’ legendary brand, well-praised by people not only across Vietnam but also over the world. A bowl of ‘pho’ Thin is always brimming with meat, lots of onions and greasy broth that is irresistible even to the most fastidious customers. The restaurant serves only one kind of noodle soup in which beef is rolled quickly in a large pan with many different spices. 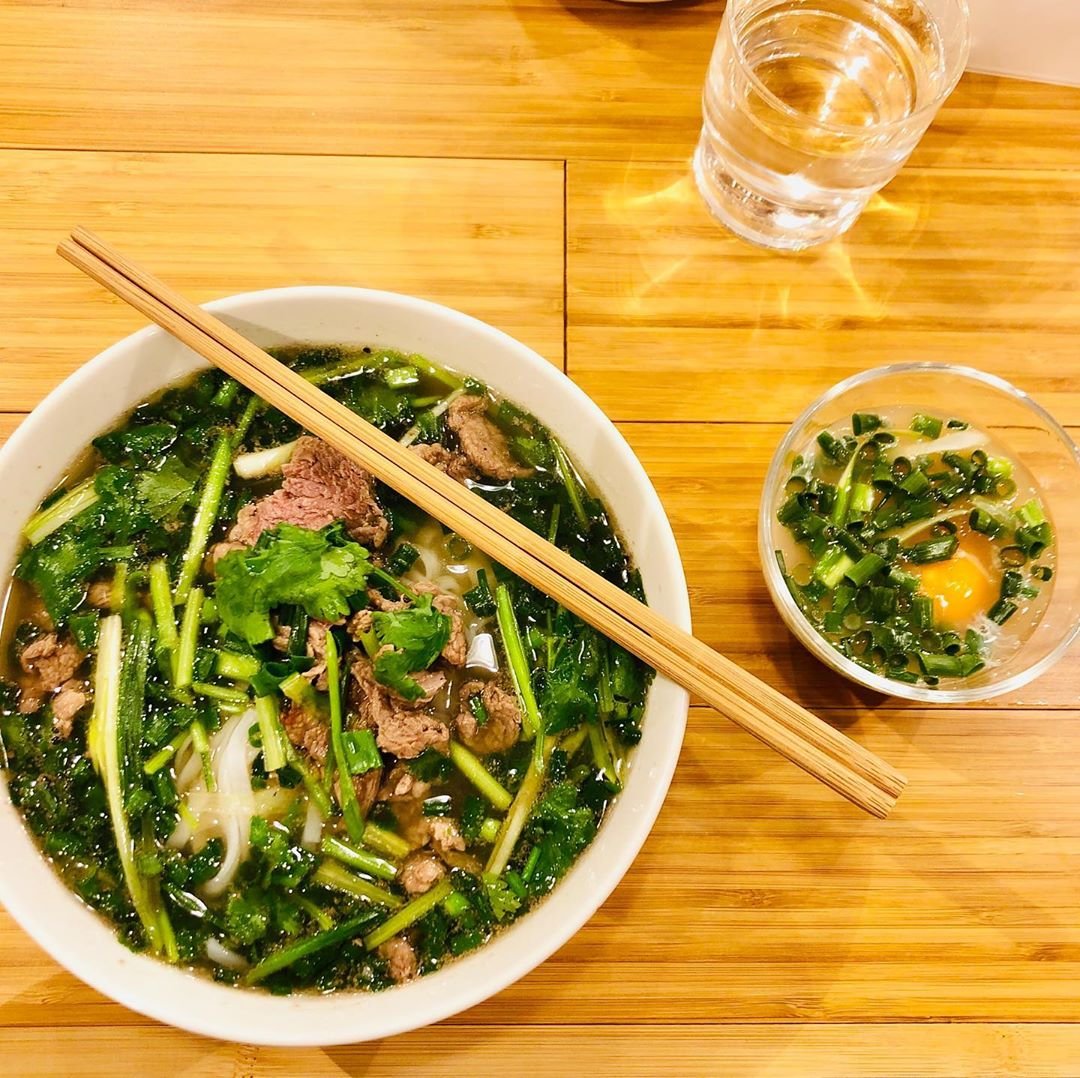 In addition to cinnamon rolls and shrimp paste, steam riced rolls made by Mrs. Hoanh here are also served with grilled pork meat which is the highlight of the restaurant. The rice paper is very thin, meat is well-marinated and dipped in tasty sauce for an unforgettable plate of ‘banh cuon’. 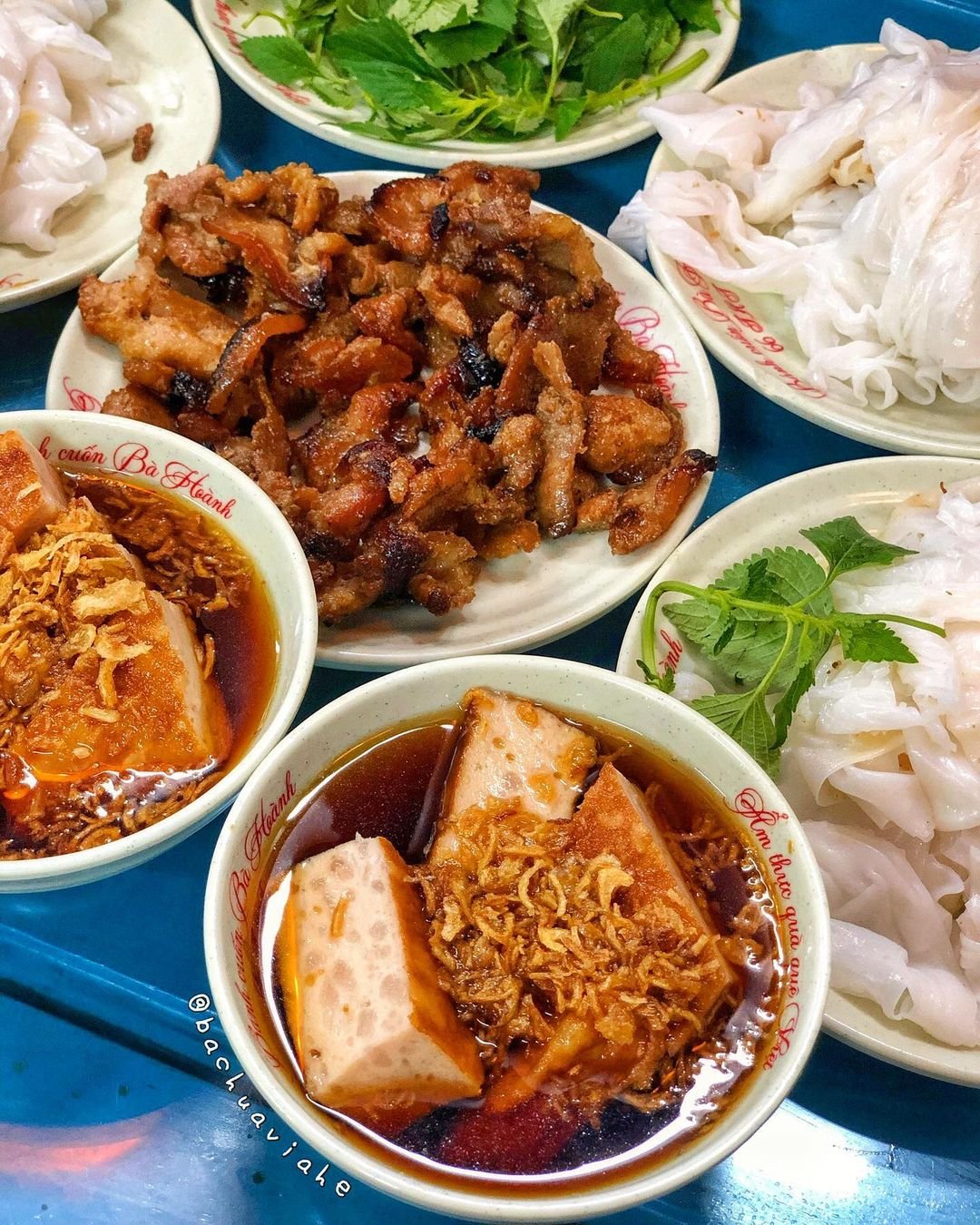 Chicken congee made by Mrs. My on the famous Church neighborhood attracts many customers not only for its special flavor but also the exotic way of selling that the owner usually swear to her staff. However, don’t worry or rush to think she is cursing customers because that’s just her characteristic and people still love her. 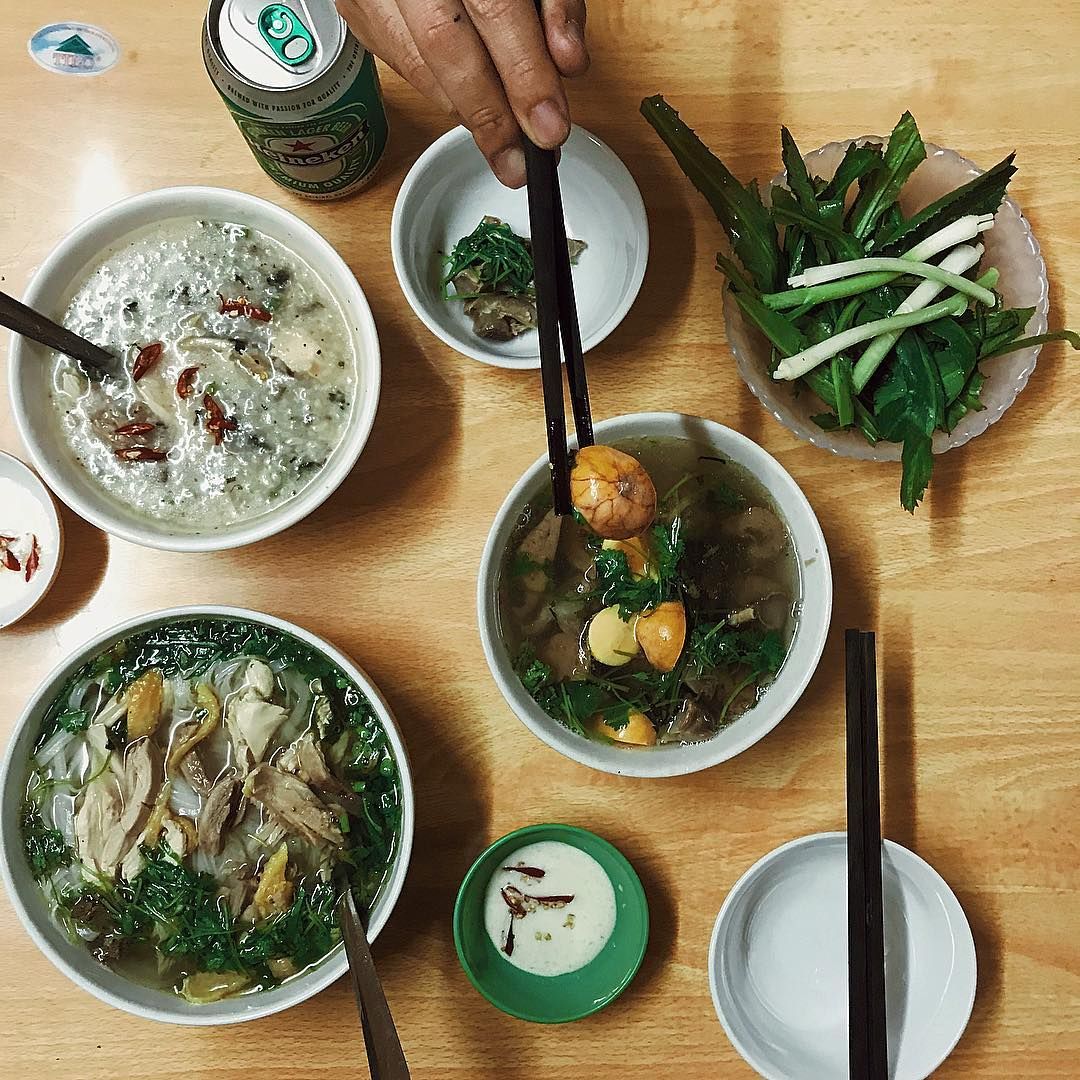 This modest restaurant is located in a narrow alley No.31 of Hang Khay backstreet in the heart of Hanoi Old Quarter. There are a dozen of restaurants selling ‘bun dau mam tom’ in this alley so it’s hard to find the best one. According to many locals and seasoned travelers, the first restaurant on the left is worth your try most. A tray of ‘bun dau’ there comprises nearly tens of items such as fried tofu, black pudding and stomach. Thin sliced pork leg and boiled pork tongue are also added to balance those greasy ingredients above. This smelliest food is best to be enjoyed in sidewalk food stalls. 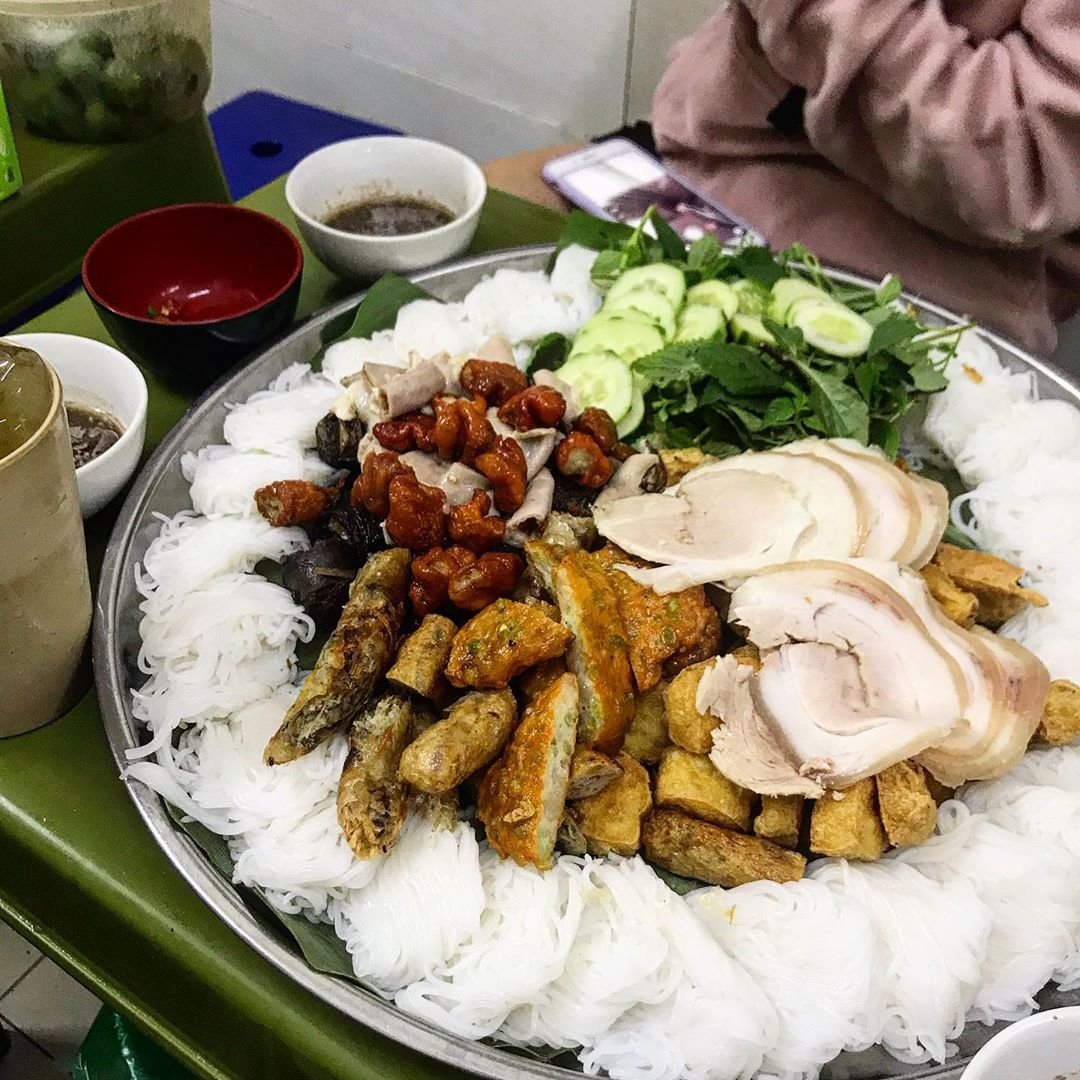 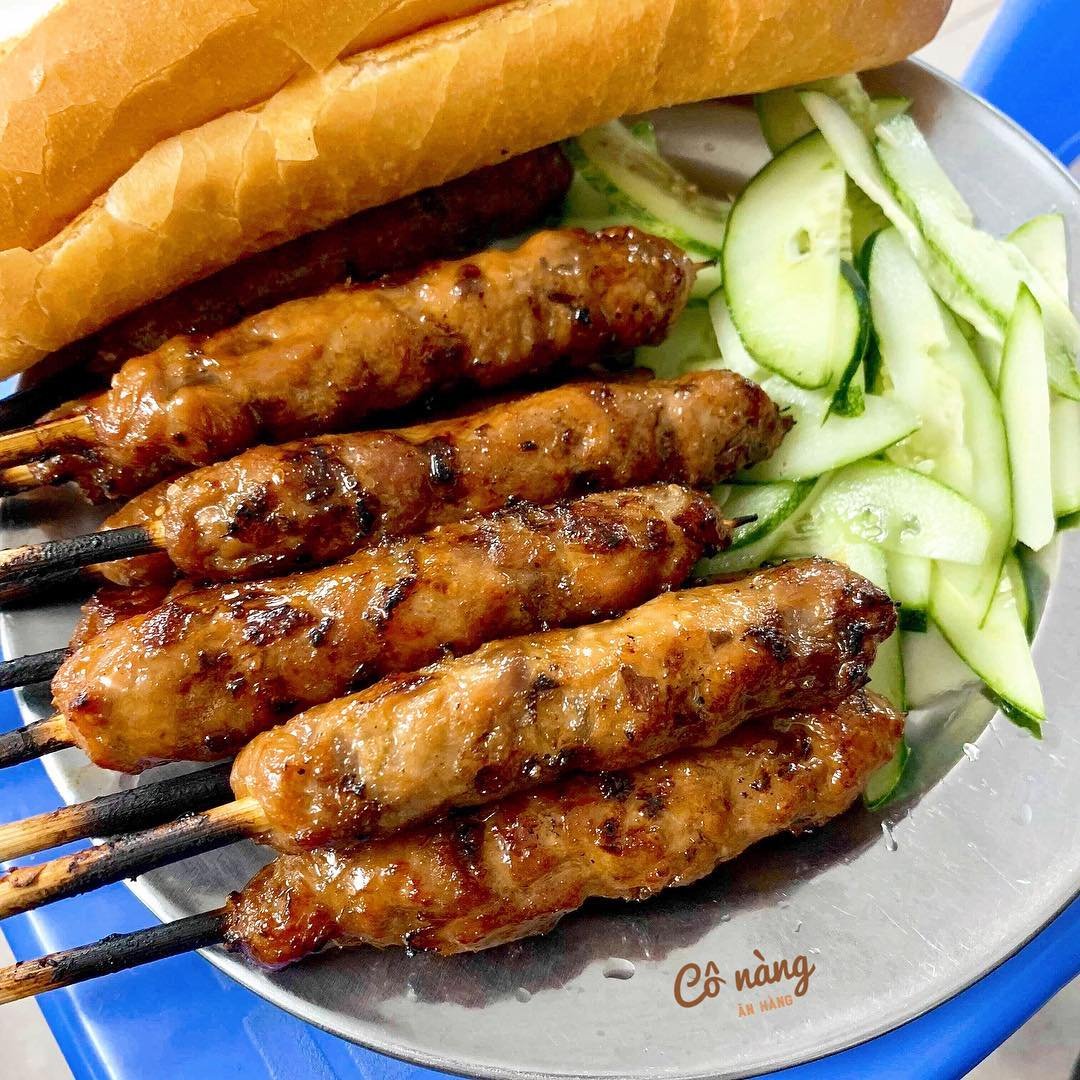 Ham Long is renowned for a dozen of salad stalls lined up the street. Amongst those, salad Mai Nga at No.25 is the oldest and most famous one. The restaurant differentiates itself from the crowed by the light sweet and sour flavor that no one can imitate. Here you can enjoy two main kinds of salad namely traditional dried beef salad and sun-dried salad mixed with organ meats. Other additional snacks include ‘banh bot loc’ (Vietnamese tapioca dumpling), ‘co ga’ (chicken’s neck) and ‘chim quay’ (roasted quail). 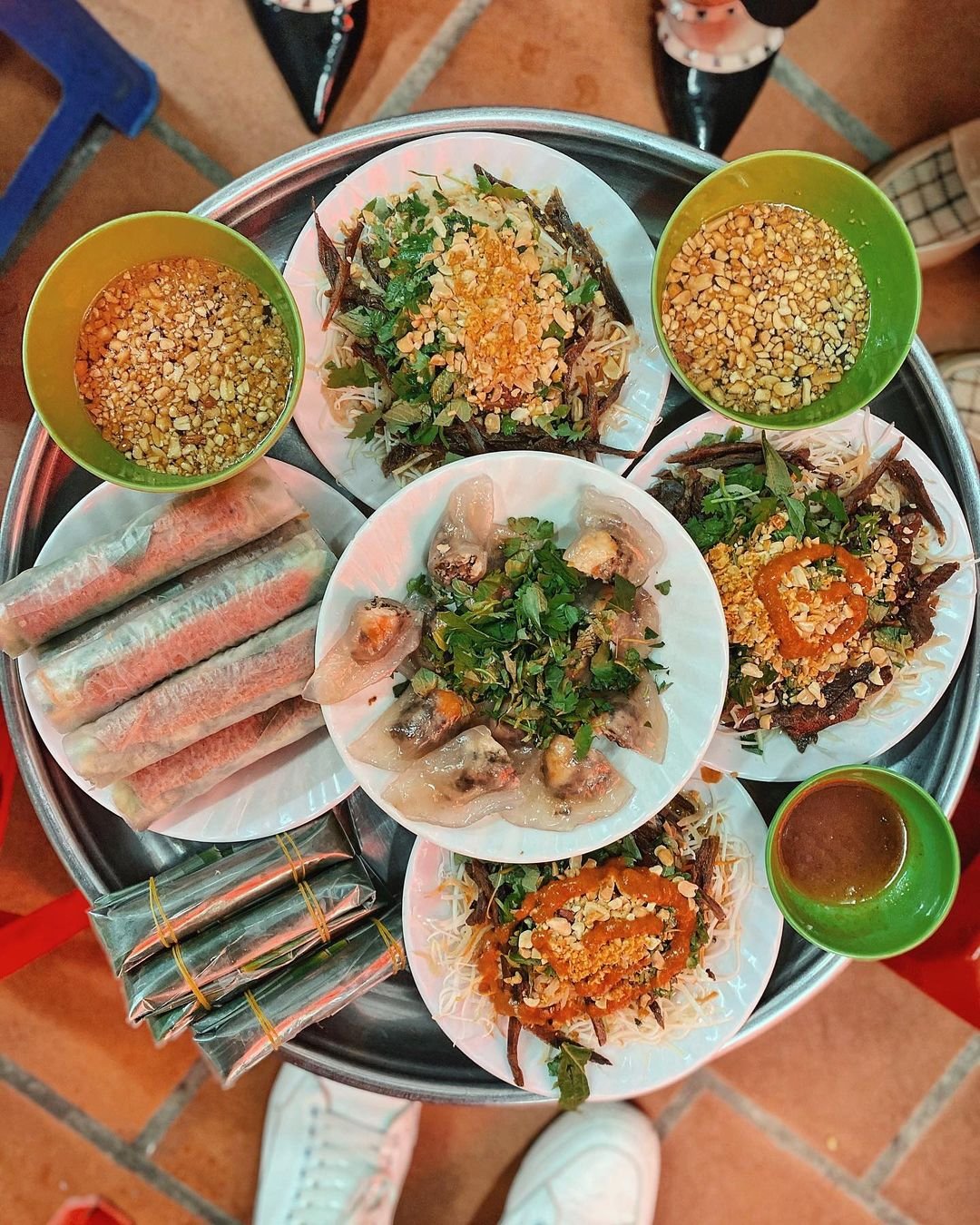 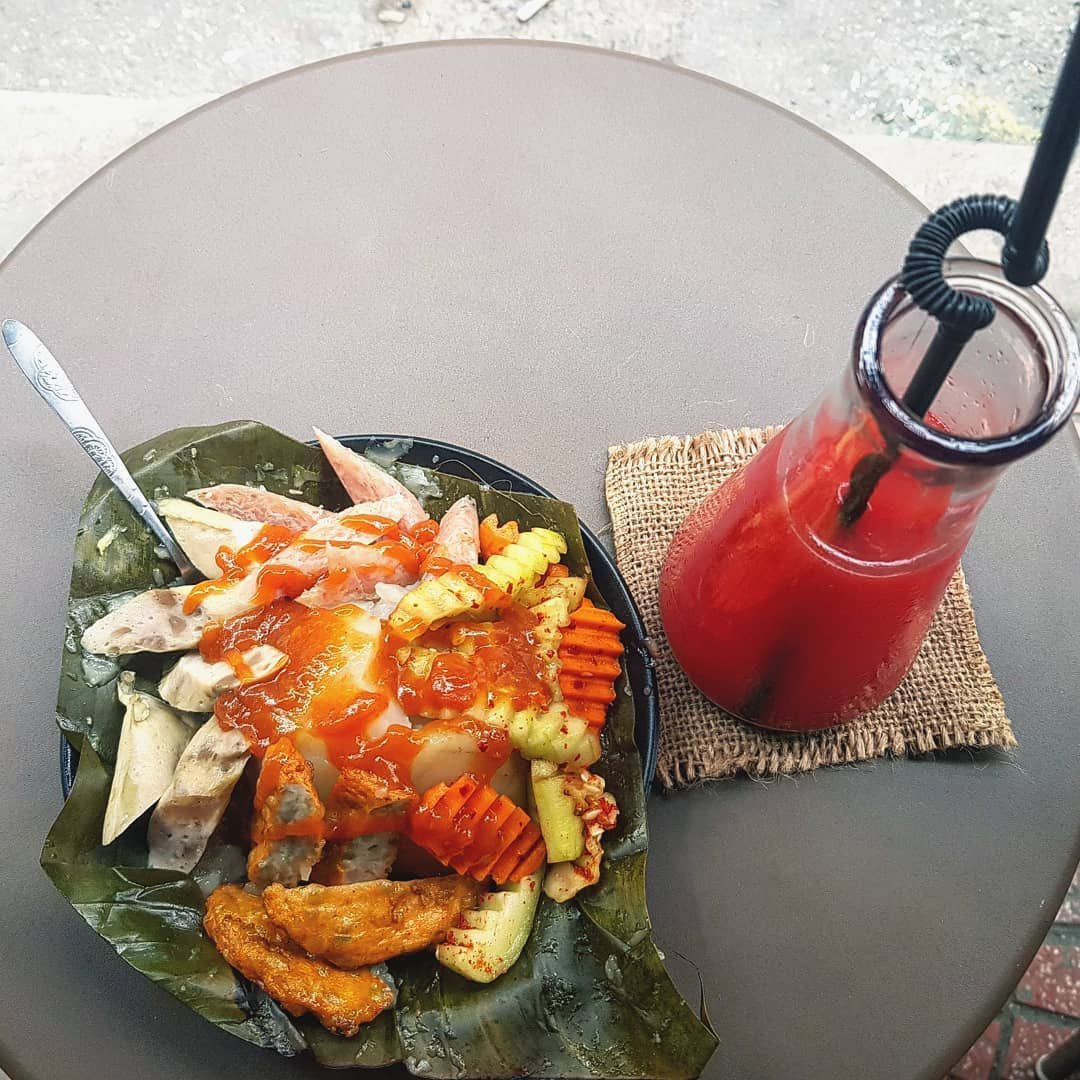 ‘Banh ran luc lac’ is a popular snack of Hanoi people during the Vietnam’s subsidy period. The sweet of boiled green peas and crispness of the thin crust make the cake appealing and irresistible to anyone trying it at least once. In addition to ‘banh ran’, other traditional cakes made by Gia Trinh are usually sold out very quickly, especially in Tet holiday and over special occassions. Therefore, you should come there and order a week in advance before the festivals to avoid overwhelming. 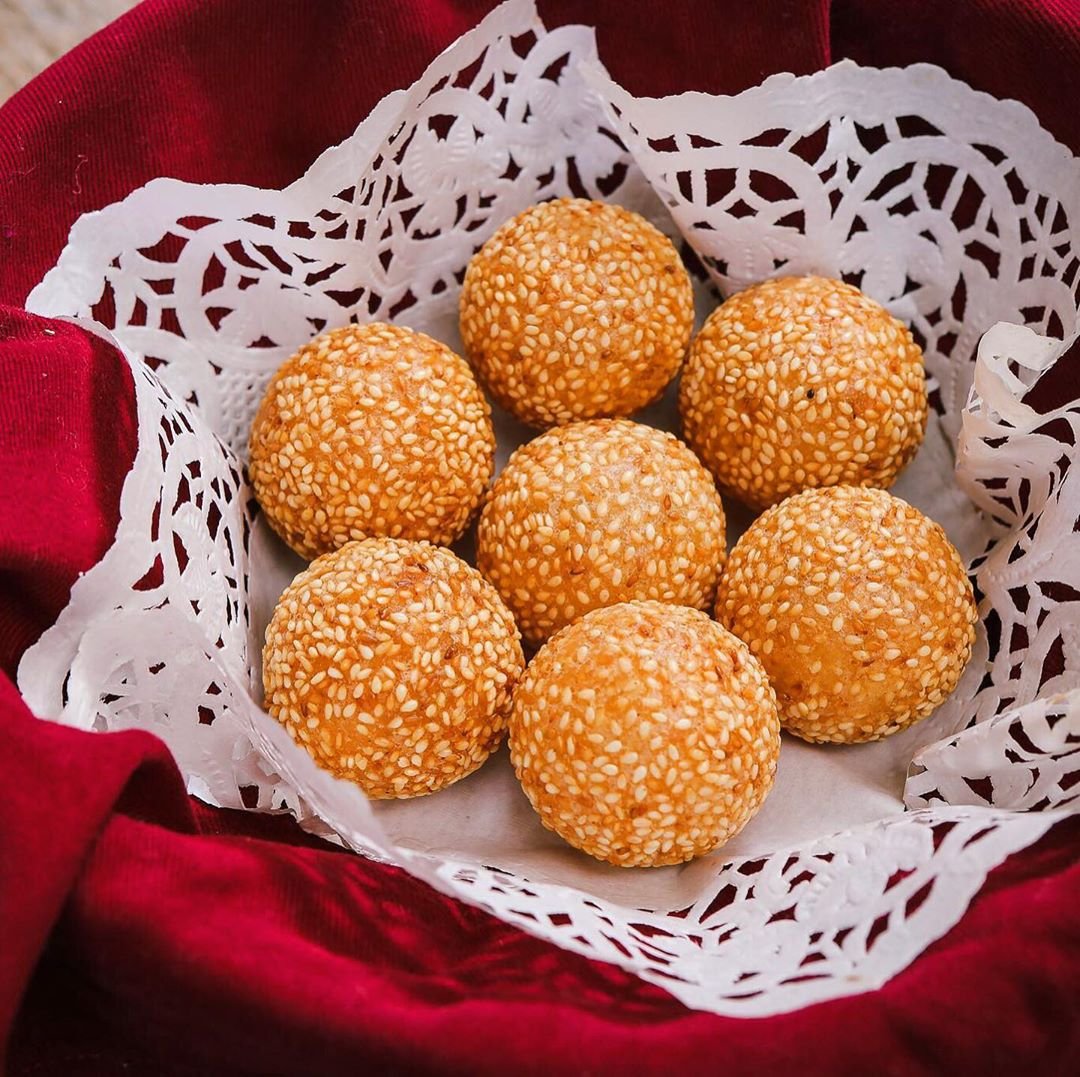 For nearly two decades, ‘quay’ stall on Hang Bong Street still remains its flavor. Hot break sticks have not only always been a favorite of Hanoi people for a long time but also the remembrance for the best memories of the childhood with same taste, same sellers and a few plastic chairs like in the past. 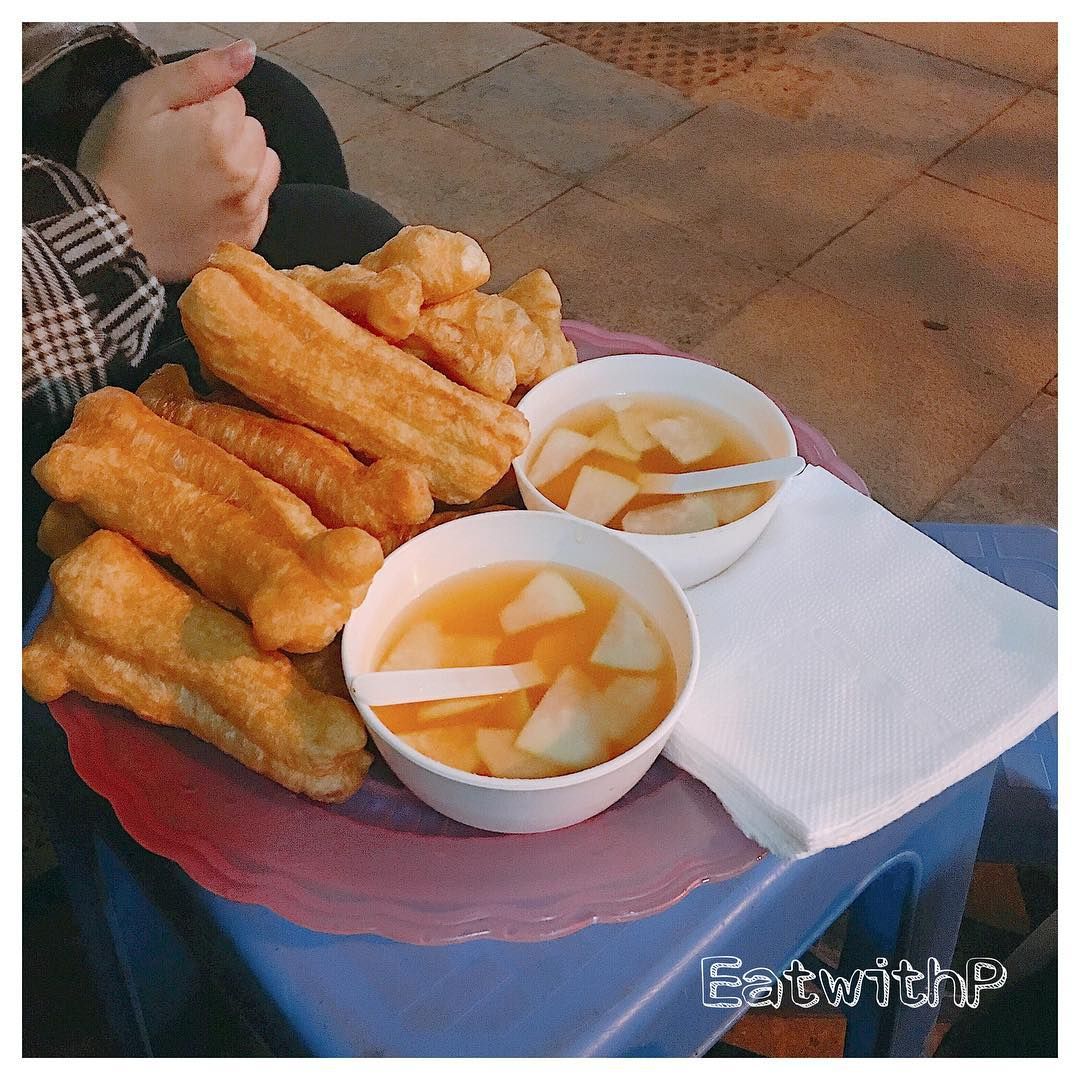 This 30-year-old sweet gruel shop is located at the crossroad of Ngo Thi Nham and Le Van Huu Street. It is arguably the oldest shop in Hanoi selling many kinds of traditional gruels namely green bean sweet gruel, black bean sweet gruel, lotus seed gruel and steamed sticky rice with sweet gruel. Thanks to natural ingredients and traditional cooking method, the gruel always remains the light sweet flavor. Prices are cheap from only 10,000 VND to 15,000 VND. 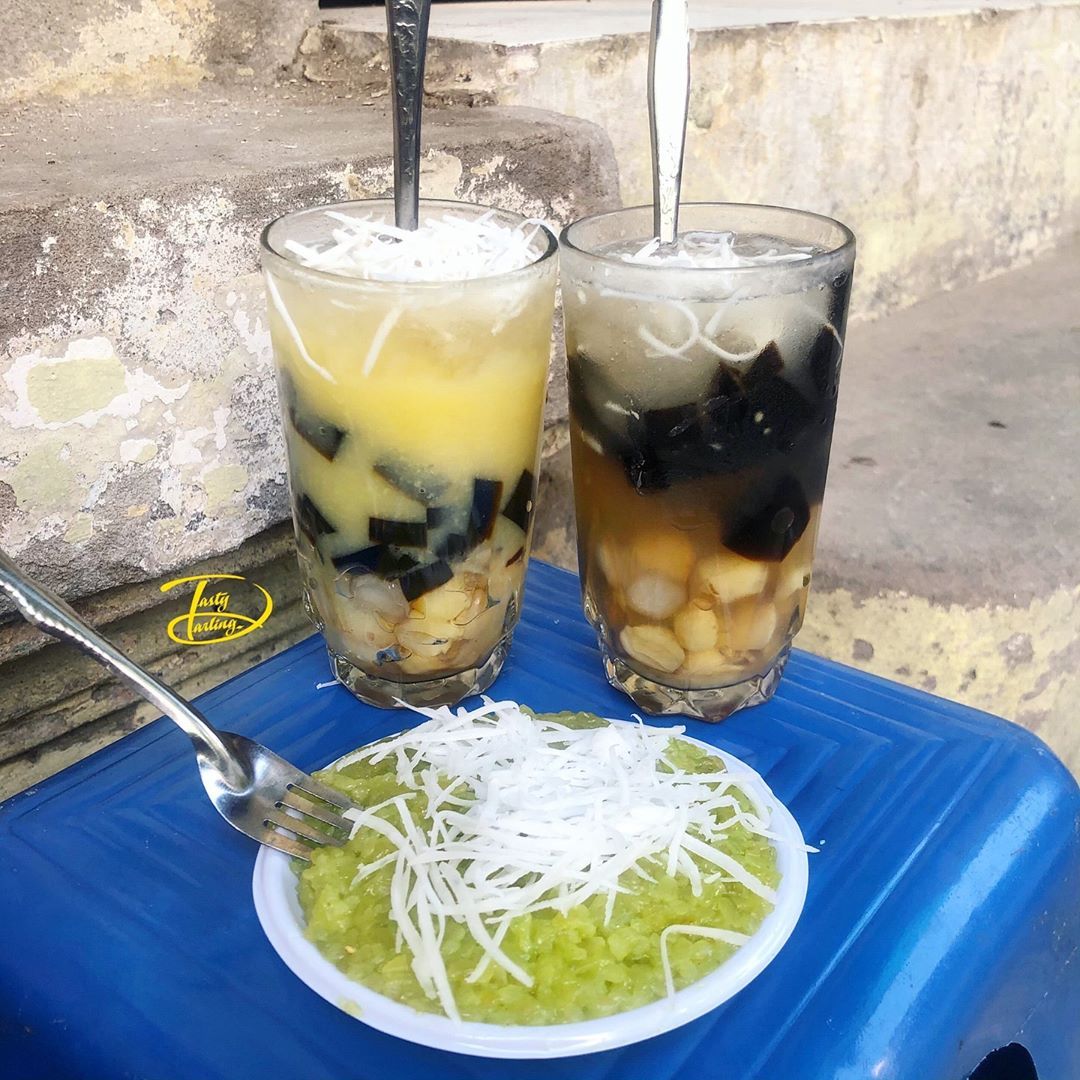 ‘Xoi xeo’ (Vietnamese yellow sticky rice with fried onions) made by Mrs. May on Hang Bai Street has been a popular on-the-way breakfast for Hanoi locals over 2 decades. Greasy ‘xoi xeo’ features yellow sticky rice and is usually topped with green peas, fried onions. All ingredients here are fresh and safe to people’s health which has contributed to the long-lasting reputation of the stall.

Street stalls and restaurants selling mussel congee abound Hanoi’s backstreets. However, at nowhere but ‘chao trai’ Tran Xuan Xoan, you can enjoy a bowl of well-cooked glutinous rice congee filled with pieces of mussel. The restaurant has existed for over 30 years. It becomes a trusted destination for delicious mussel congee but at an affordable price (around 30,000 VND). The restaurant also served ‘tao pho’ (Vietnamese tofu), a favorite dish for Hanoians, especially in summer. 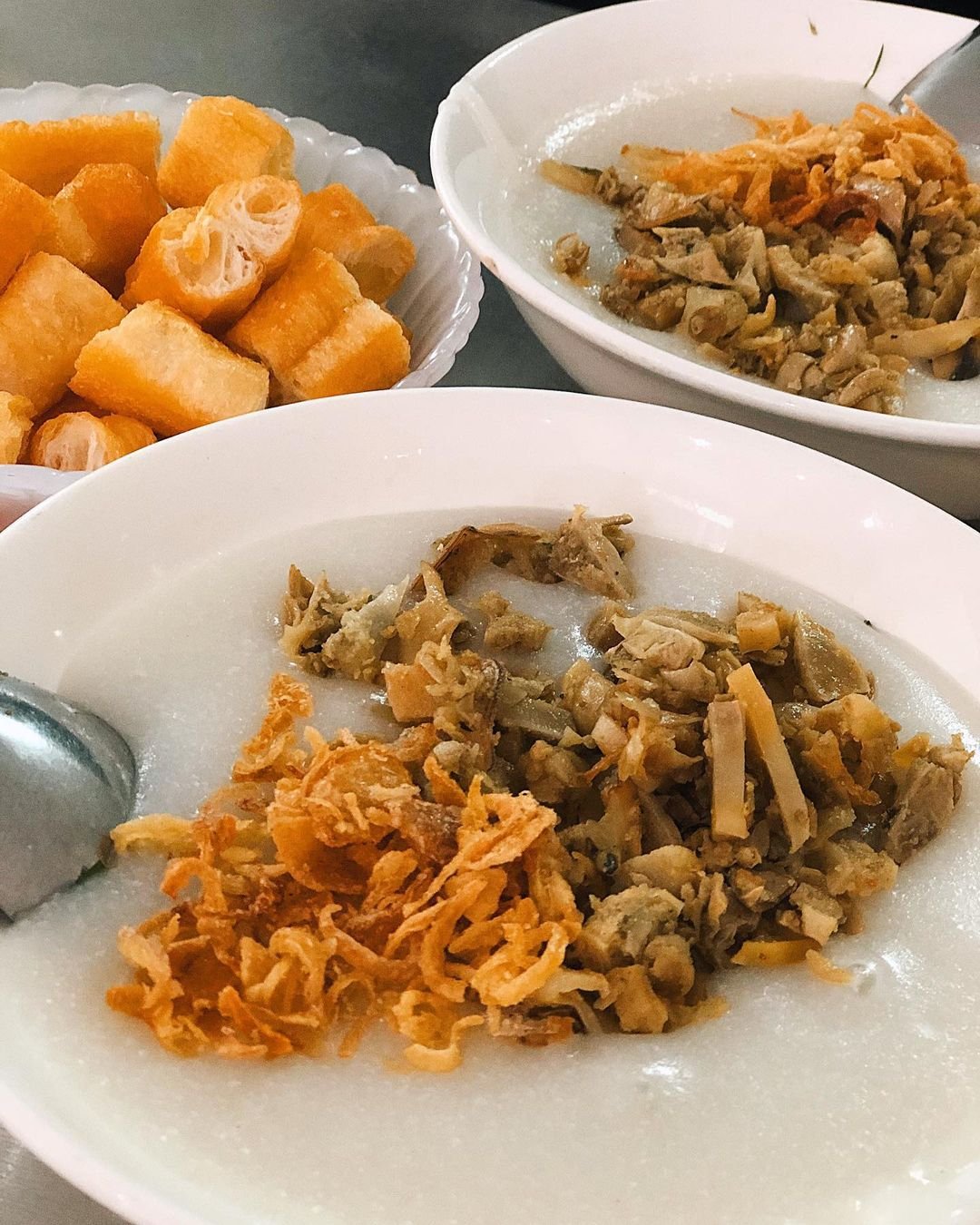 Fried ribs on Le Duan Street have gained great reputation for a long time. The dish is not a kind of specialty but a favorite snack of Hanoi people made from simple ingredients. Thanks to the special marinating and frying method, fried ribs here can satisfy even the most difficult customers. Beside fried ribs, you can try other delicious dishes such as roasted stomach, pork rib porridge and fried chicken. 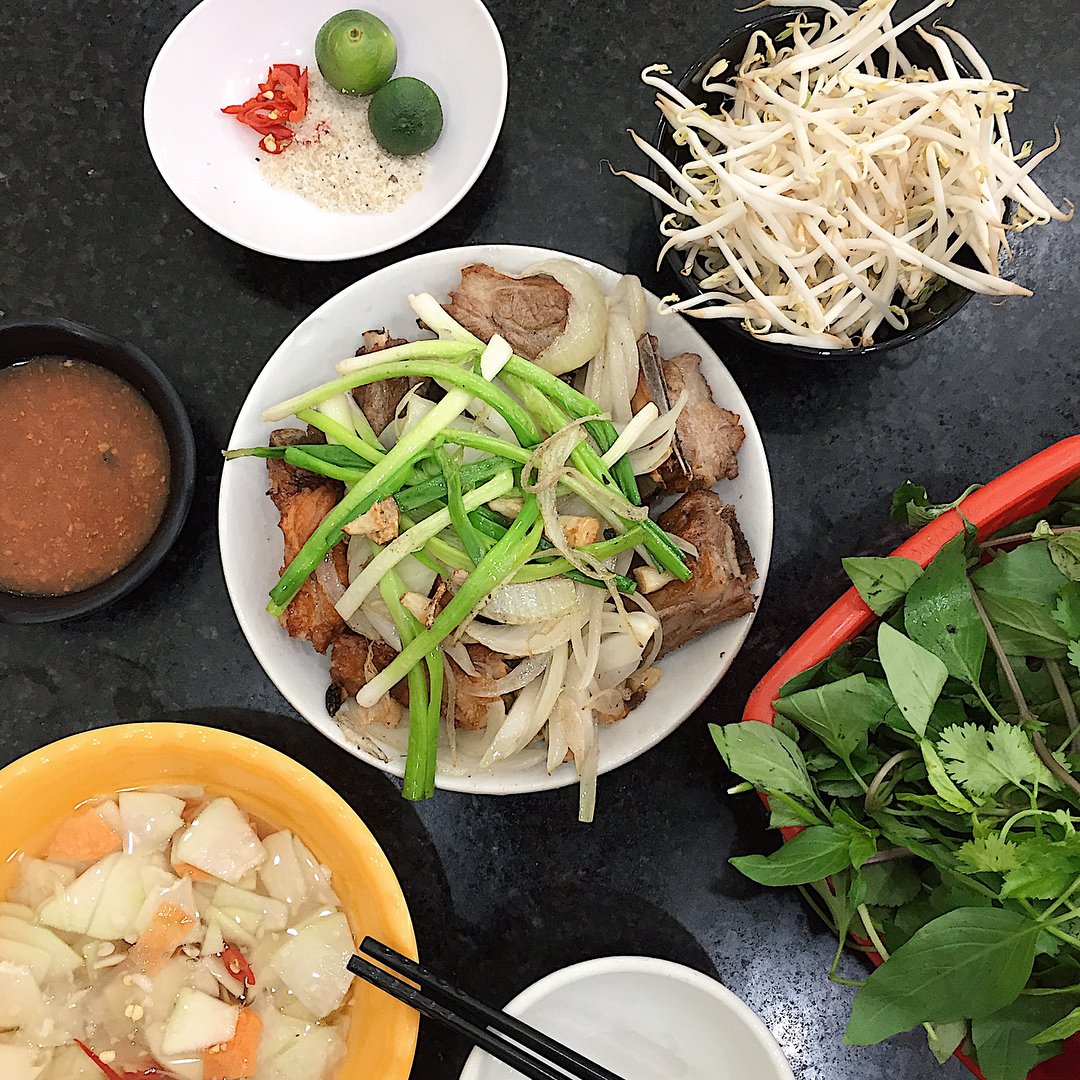 Opened more 20 years ago, ramen noodle soup stall on No.8 Nguyen Bieu Street is always crowded with lines of guests waiting for being served like in the subsidy period. The noodles here are highly appreciated by the way of cooking broth and the flavor of shrimp dumplings.

This specialty is enjoyed by many Hanoians through generations. It’s light and suitable for a sumptuous breakfast or brunch. Despite the increasing opening of many street food stalls, this 10-year-old restaurant remains its dominance for the best ‘bun rieu’ in Hanoi that guests usually have to queue in line during rush hours. 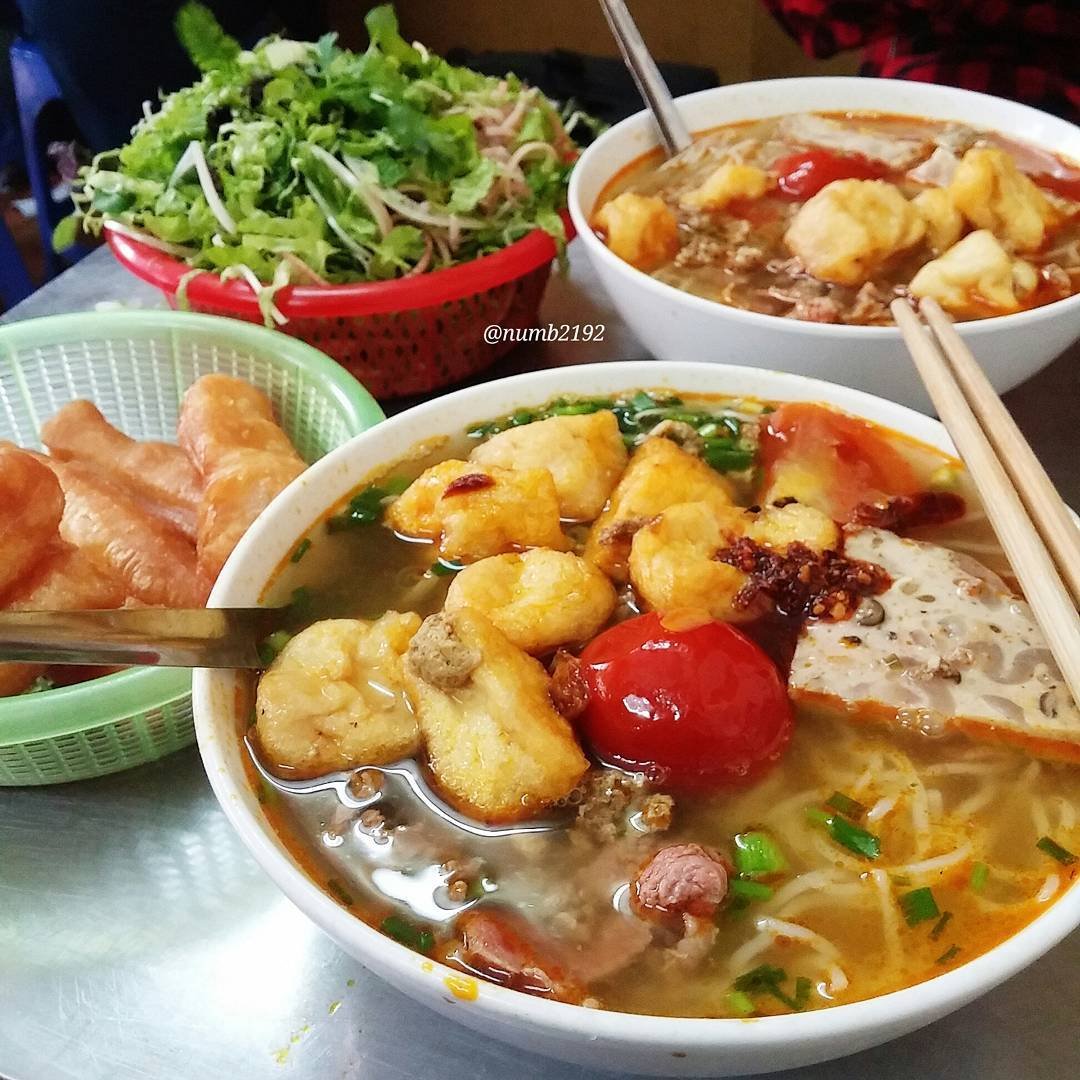 Located in a small alley of Nguyen Cong Tru backstreet, ‘xoi khuc co Lan’ boasts authentic flavor of Vietnamese sticky rice balls. Only in this restaurant, the core of ‘xoi khuc’ is filled with pieces of bacon that is soft and lean enough. ‘xoi khuc’ by Mrs. Lan is usually sold in the alley in the morning and moved out the outside road in the afternoon. 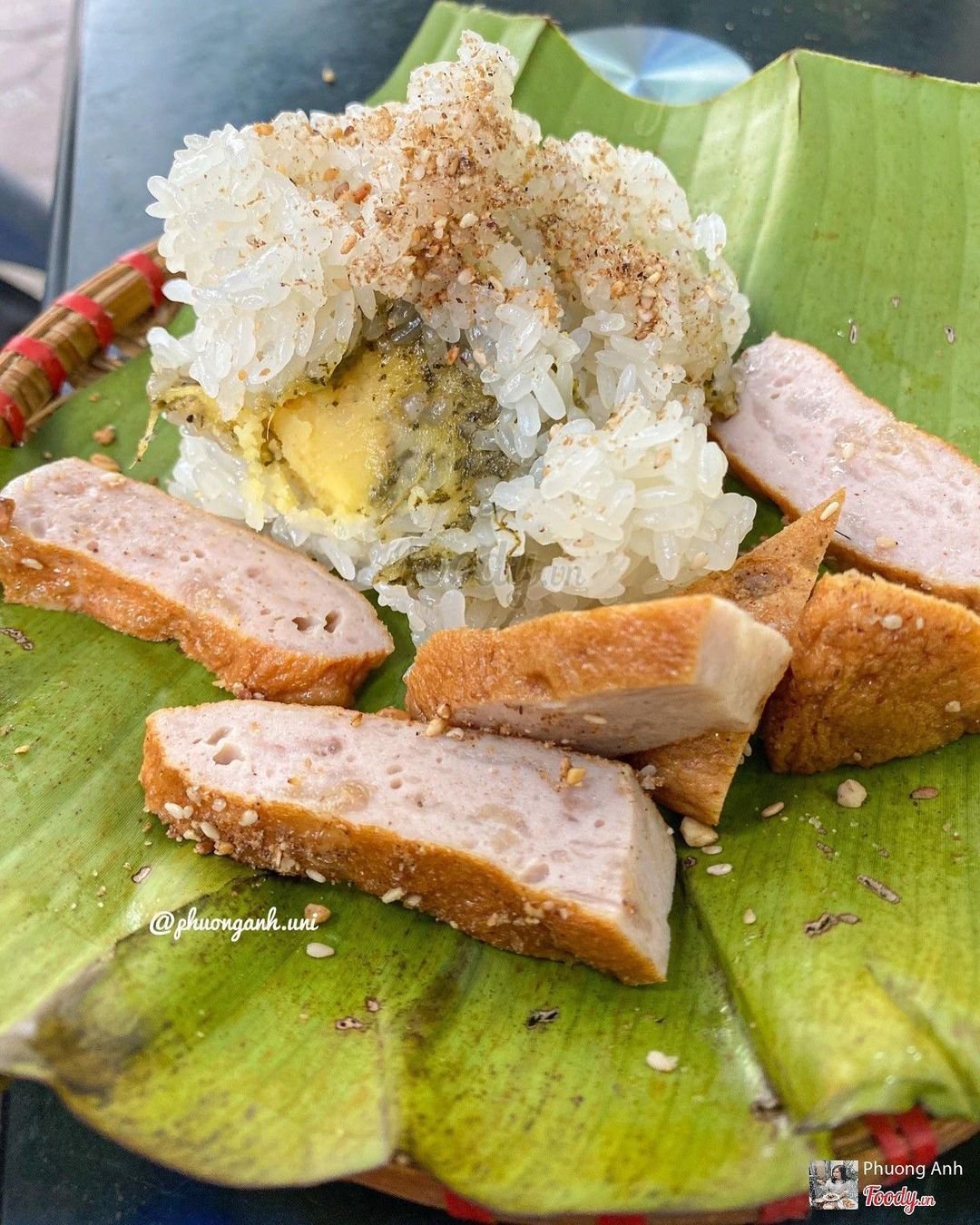