Breakfast is truly a king in Vietnam, compared to lunch and dinner

Breakfast plays a very important role as it is the energy source for a whole hard working day. In the past, breakfasts were cooked by deft hands of women in a family which enhances much the taste of the foods. In this day and age, Vietnamese women are busier with their social roles and cannot cook breakfast so frequently, so street-food stalls and restaurant are more appropriate choices. This article is going to present 9 most popular breakfast dishes in Vietnam which can both be cooked at home or found at restaurants.

Pho is not only the most popular breakfast in Vietnam but is also internationally renowned as a symbol of Vietnamese gastronomy. Thousands of Pho stores deliver thousands of taste, that’s why some Pho stores are much more well-known than the rest, and the mystery hidden in the broth of Pho. Although the same ingredients are stewing bones of cows and pigs to cook Pho Bo (Pho with beef) and stewing bones of chicken and pigs to cook Pho Ga (Pho with chiken), an excellent pot of soup is determined by extra spices. Rice noodle used in a bowl of Pho is made of a special type of rice called “gao te” which is famous for its fragrance. Best served Pho are Pho Bo Tai (rare fillet) and Pho Ga (boneless white chicken meat). Others variety of Pho are Pho Bo Gau, Pho Bo Tai Nam and Pho Sot Vang. Lemon and chilly are indispensable for the best taste of Pho. 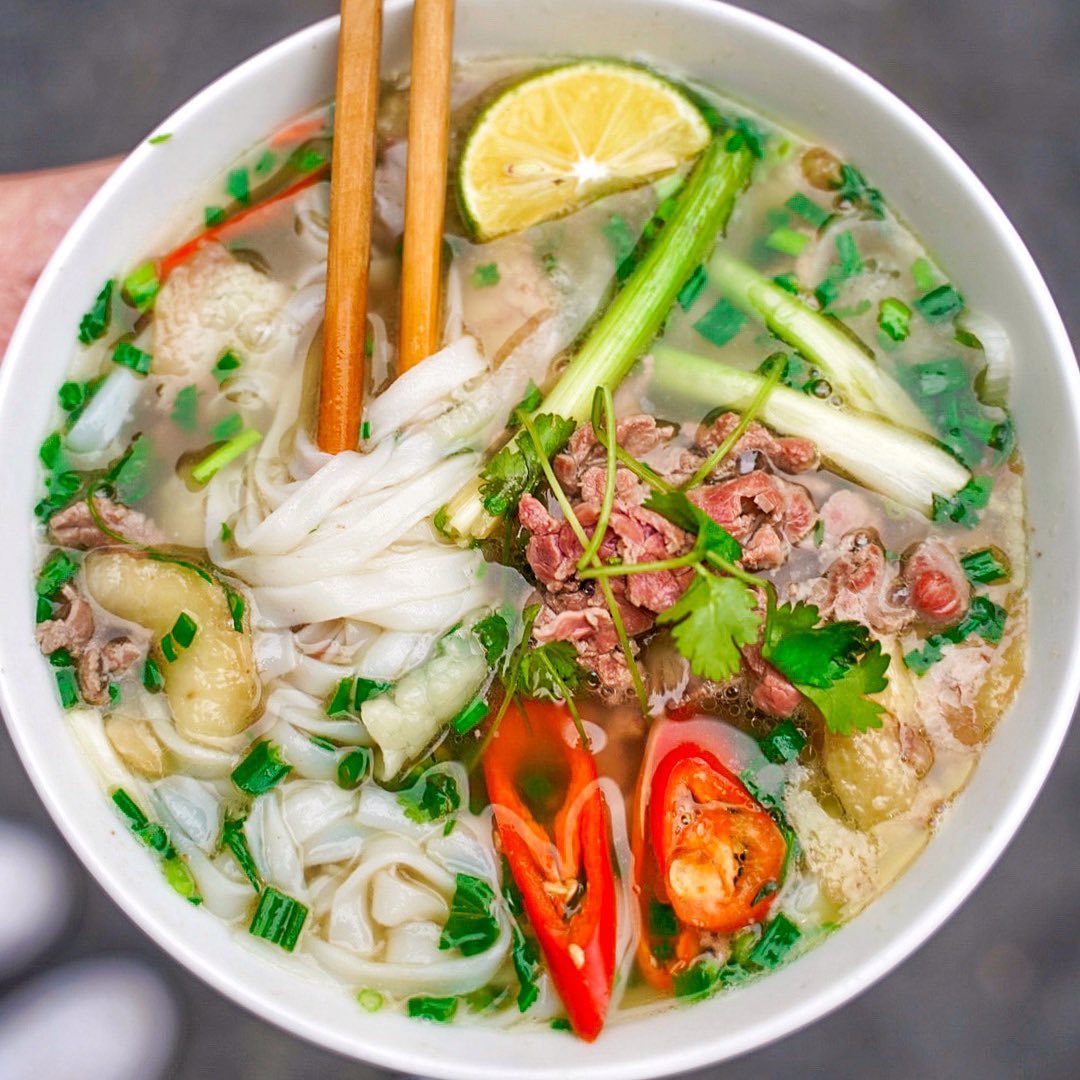 Similar to Pho, Bun is made of rice flour but instead of flat triangle shape like Pho, Bun has small and circular shape. Recipes to make Bun’s broth are even more diverse than Pho, which result in different vermicelli dishes, most popular ones are Bun Cha (vermicelli and grilled chopped meat), Bun Rieu (vermicelli and crab meat soup), Bun Thang (varied vermicelli), Bun Ca (vermicelli with fried fish) and Bun Oc (vermicelli and snail), while Bun Bo (vermicelli with beef) is specialty of Hue. Specific trait of Bun is an adequate sour taste the main ingredients of their soup are tomato, garcinia cowa and lemon lime. 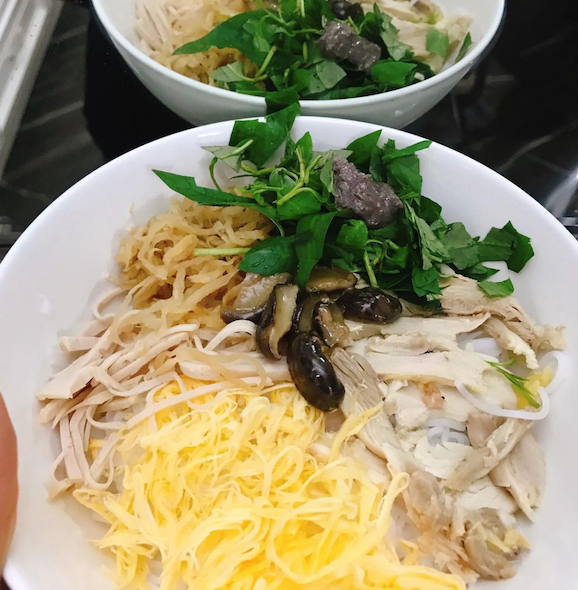 Mien has a similar shape to Bun; however, this Chinese originated noodle is not made of rice flour; seaweed and cassava flour are used instead. Thanks to this, Mien is a less-calorie food as well as a vegetarian favorable by on-diet people. Basically, main components of Mien’s broth is the same with Pho, however, its spices are sourer and maybe more fishy because Mien usually eaten with sea-foods. Mien Luon (Mien with eal) is the most popular type of Mien in Vietnam, especially in Hanoi. Broth to cook this special Mien is made of eel’s bones and gingers; then sliced fried eel would be added later. Fresh uncooked vegetables are recommended to eat with Mien Luon to eliminate the fishy taste of it. Other variables of Mien are Mien Ngan (Mien with goose meat), Mien Cua (Mien with crab meat) or Mien Ga (Mien withj chicken). Although Pho is well-known all over the world, it is hard to tell whether Pho or Xoi is more popular for breakfast in Vietnam. Even in the smallest lanes in Vietnam ones can find a street-stall selling Xoi in the morning or recognize one or two people carrying a basket of Xoi, covered by banana leaves, on their head of bicycles advertising their Xoi loudly. This sticky rice varies from simple low-price ones like Xoi Gac (Xoi colored with Gac’s oil), Xoi Do Xanh (Xoi with green beans), Xoi Lac (Xoi with peanuts) or Xoi Ngo (Xoi wih corns) for commoners to higher ranks like Xoi Trung (Xoi with egg), Xoi Pate (Xoi with paste) or Xoi Cha (Xoi with meat rolls). 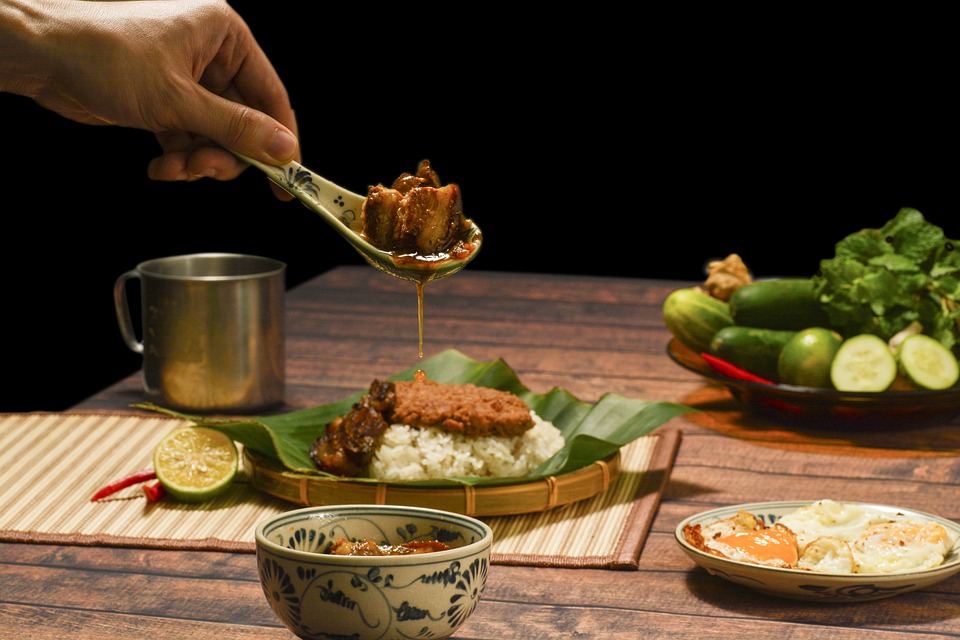 Banh Mi has its origin from France during the colonial period in Vietnam in the late 1800’s. Since then, French eating behaviour has been strongly affecting Vietnamese gastronomy, including bread for breakfast. Goose’s liver paste should be the best crepe for bread when this food was first introduced. Gradually, Vietnamese bakers has innovated more variables of crepe to create a unique type of bread in Vietnam, which are uncooked vegetables, shrimp, sausage, pig’s liver paste eaten with tomato or chili sauce. Recently, Vietnam has adopted Donner Kebab bread from Turkey, which is highly appreciated by its civilians. 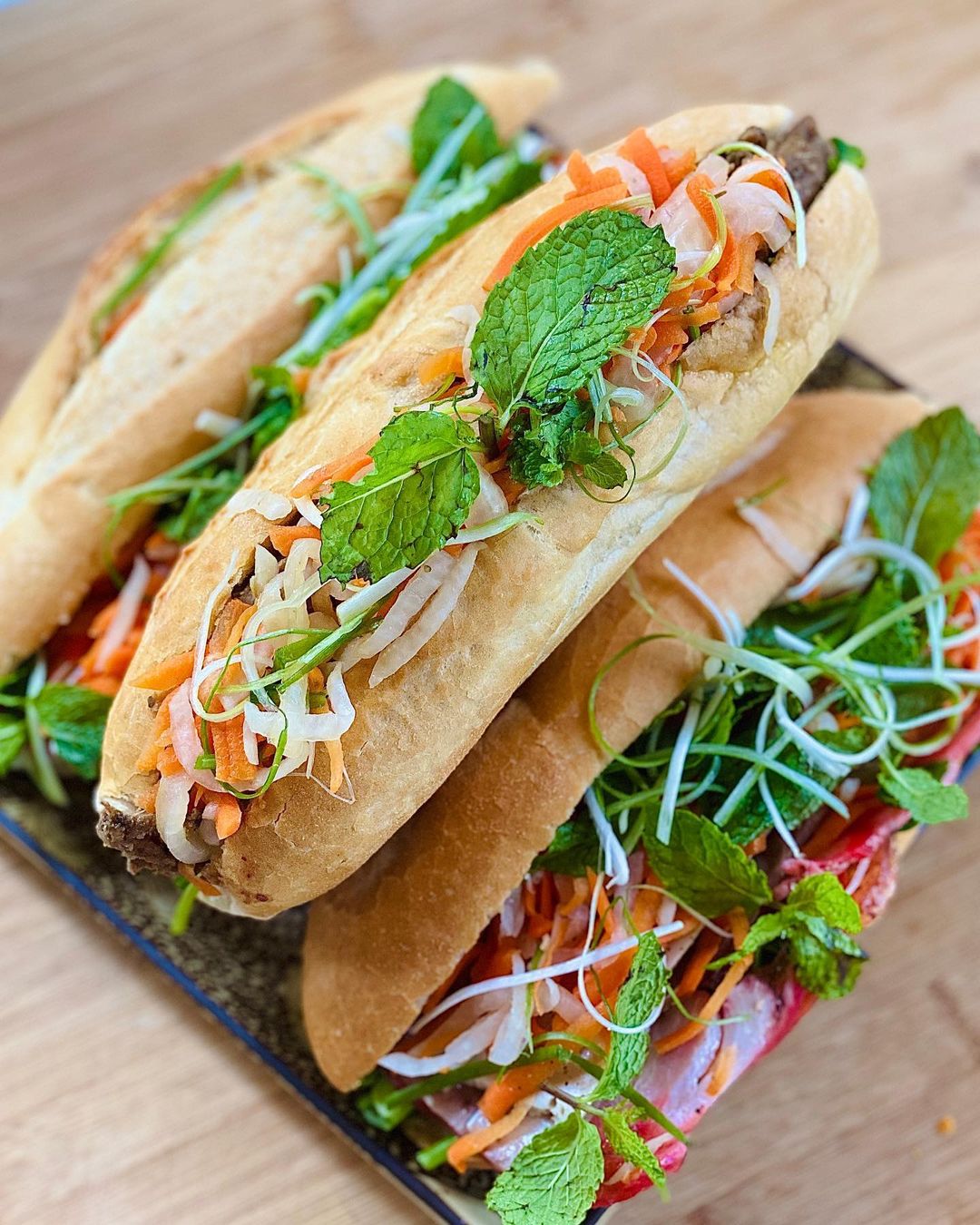 Rice seems to be the mother of many Vietnamese delicious foods, yet, another specialty made of rice flour: Banh Cuon. Banh Cuon is covered by a thin, wide sheet of steamed rice flour and its core filled with seasoned ground pork, and minced wood ear mushroom. Banh cuon is usually served with Cha Que and special dipping sauce named “nước chấm” made only for Banh Cuon. In the past, the dipping sauce was added some drops of Ca Cuong’s oil for the perfect flavor. Nowadays, although ones can still taste Ca Cuong’s oil, it is getting scarce and much more expensive. 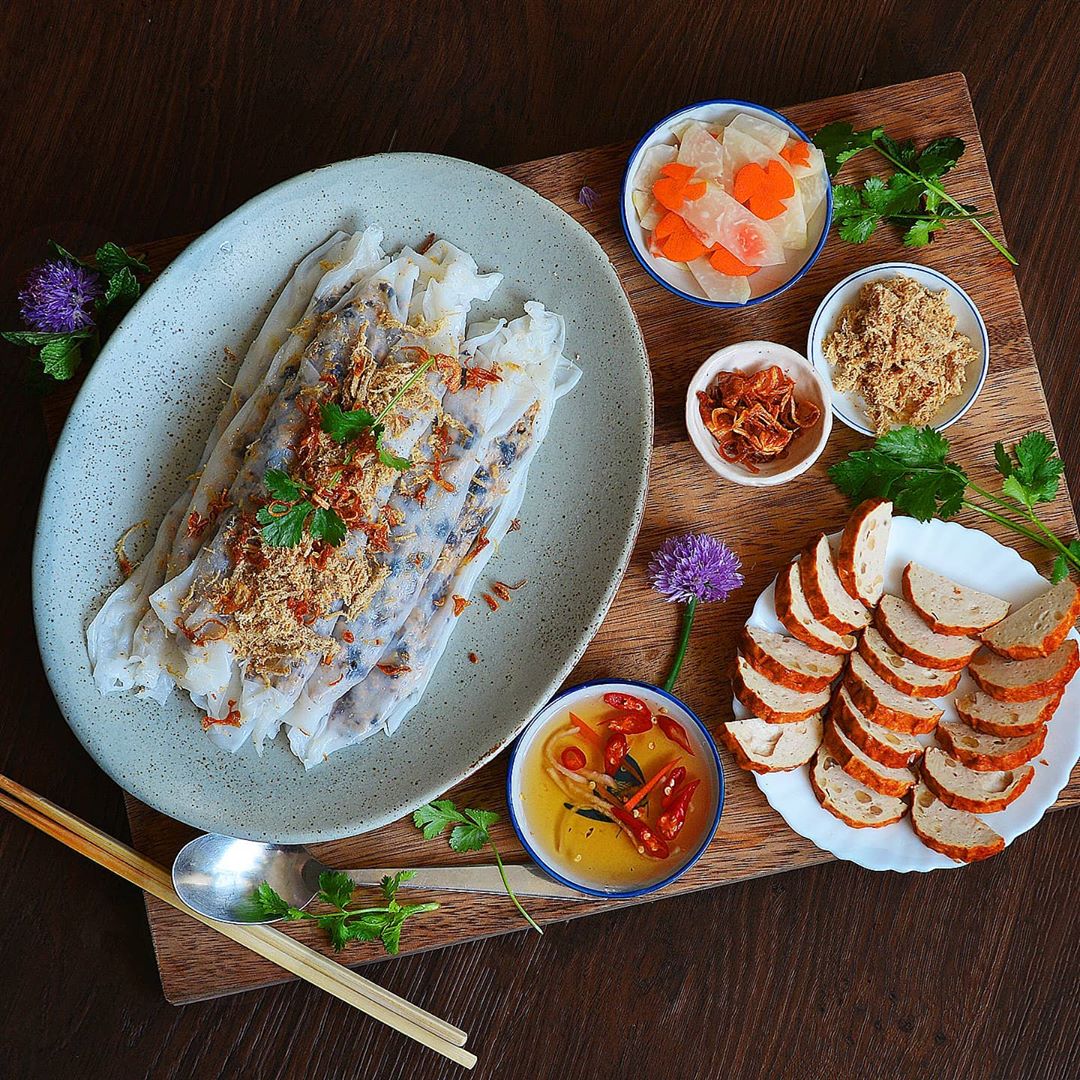 Congee or rice porridge is one of the most common meals in Vietnam in not only breakfast but also lunch and dinner. Cháo is very to cook since almost every electronic rice-cooker has porridge cooking function. Although it is considered as the poor’s food, Cháo could be much fancier when cooked with a variety of meats. To illustrate, Chao Ga is chao boiled with a whole chicken with bones to get the tastiest broth. Other varieties of Cháo such as Cháo Vịt (porridge with duck); Cháo Lươn (porridge with eel) and Cháo Cá (porridge with fish), are cooked with the same method. 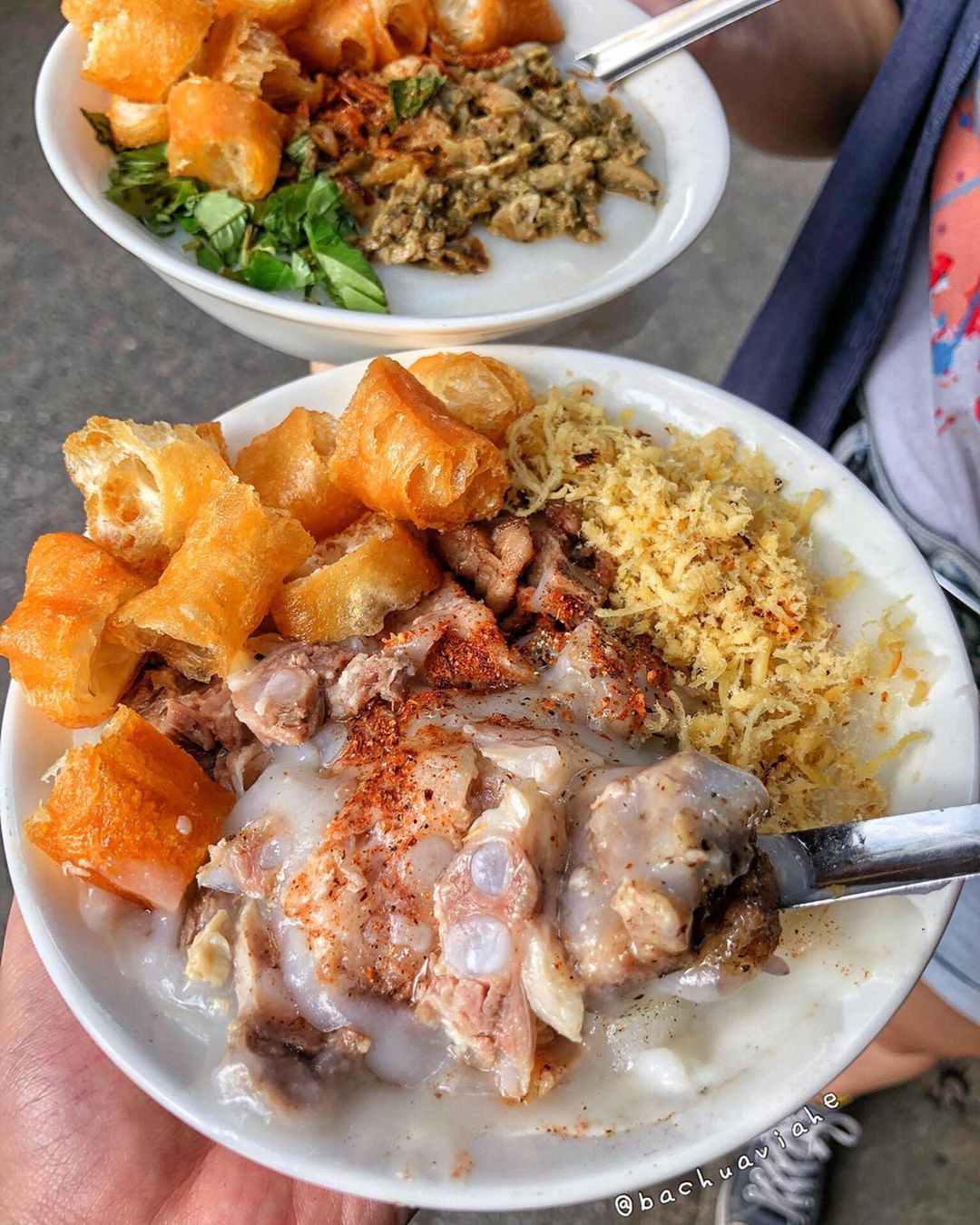 Trứng Vịt Lộn is actually duck’s embryo still laying in its shell going through fertilization process and then boiled in steamy heat. Due to this characteristic and its appearance, this dish is listed among the most ..."err" food for Western visitors. However, if ones can manage your fear to taste it one time, you may find it thousand times more delicious than normal chicken egg as well as a huge amount of protein good for your heart. In Vietnam, Trứng Vịt Lộn is favored by most people and appears in every breakfast stalls. 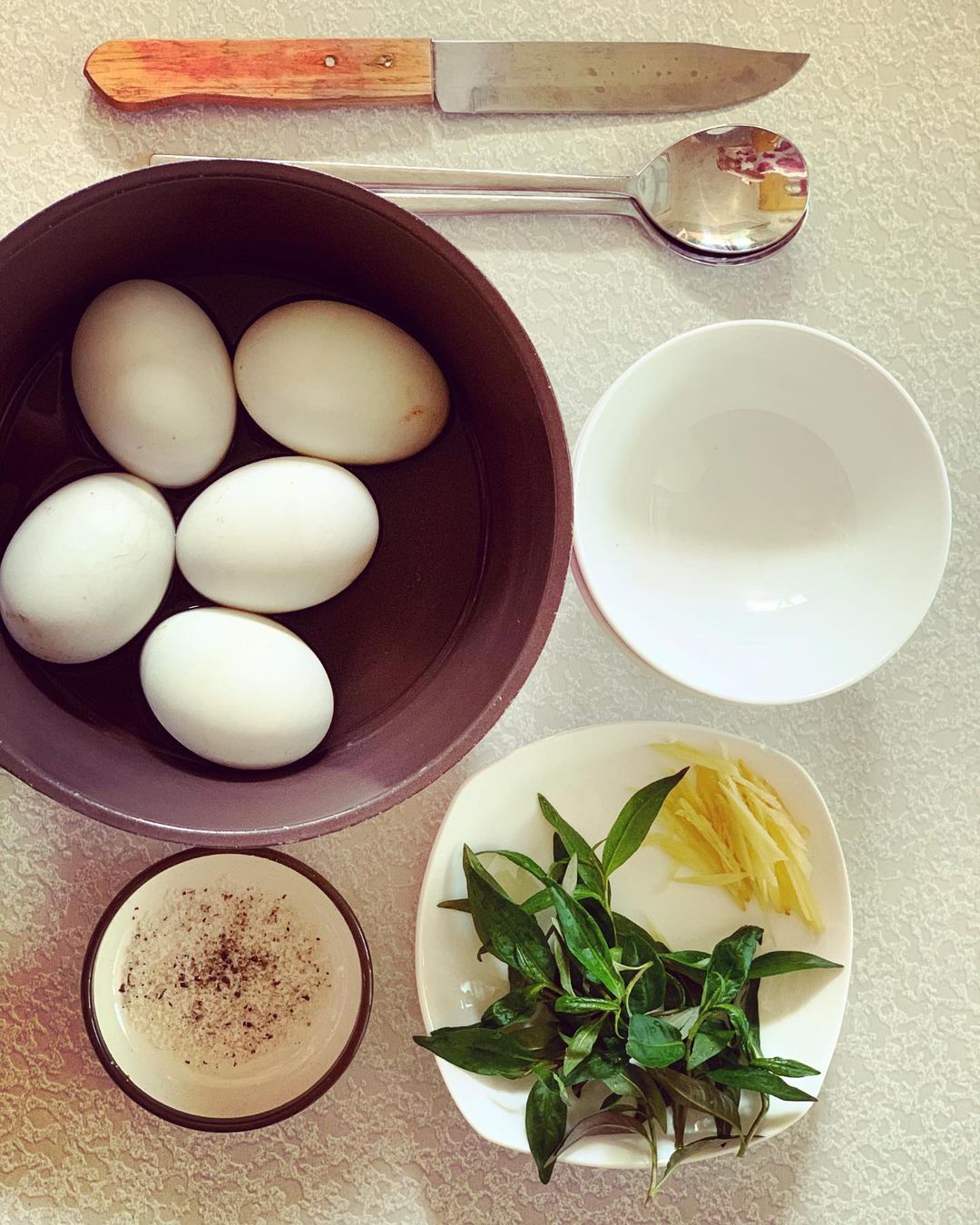 In this section we won’t discuss about an individual type of food but dozens of them. The reason for it is Vietnam food offers too many breakfast cakes and each of them is as popular and tasty as one another. Some most common cakes can be named as Bánh Chưng Rán, Bánh Giò, Bánh Khúc, Bánh Rán, Bánh Nếp, Bánh Tẻ, Bánh Đúc, Bánh Dày or Bánh Bao. There are still many more Vietnamese traditional cakes can be used for breakfast which may cost a whole essay to list out not to mention trying all of them. These are often savoury and easy to pack (like mochi in Japan) and often stuffed with mung beans. You can find them in many street food stalls and from the ladies wandering the streets with a pile of Banh on their shoulder. 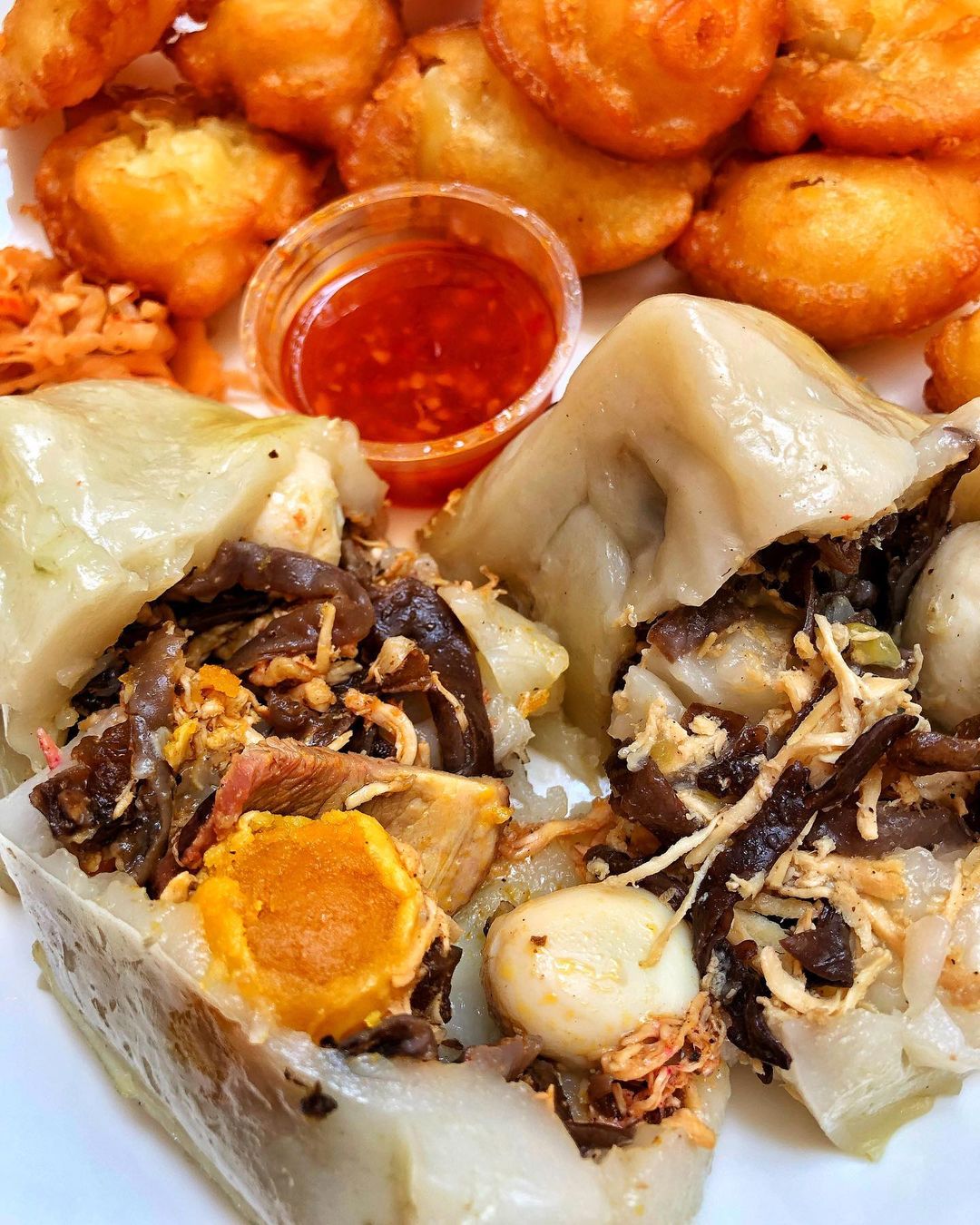