Be careful - the pot is hot!

The biting cold of Hanoi winter makes for a great chance to gather up around a steaming hotpot - a favorite of locals in the winter time. 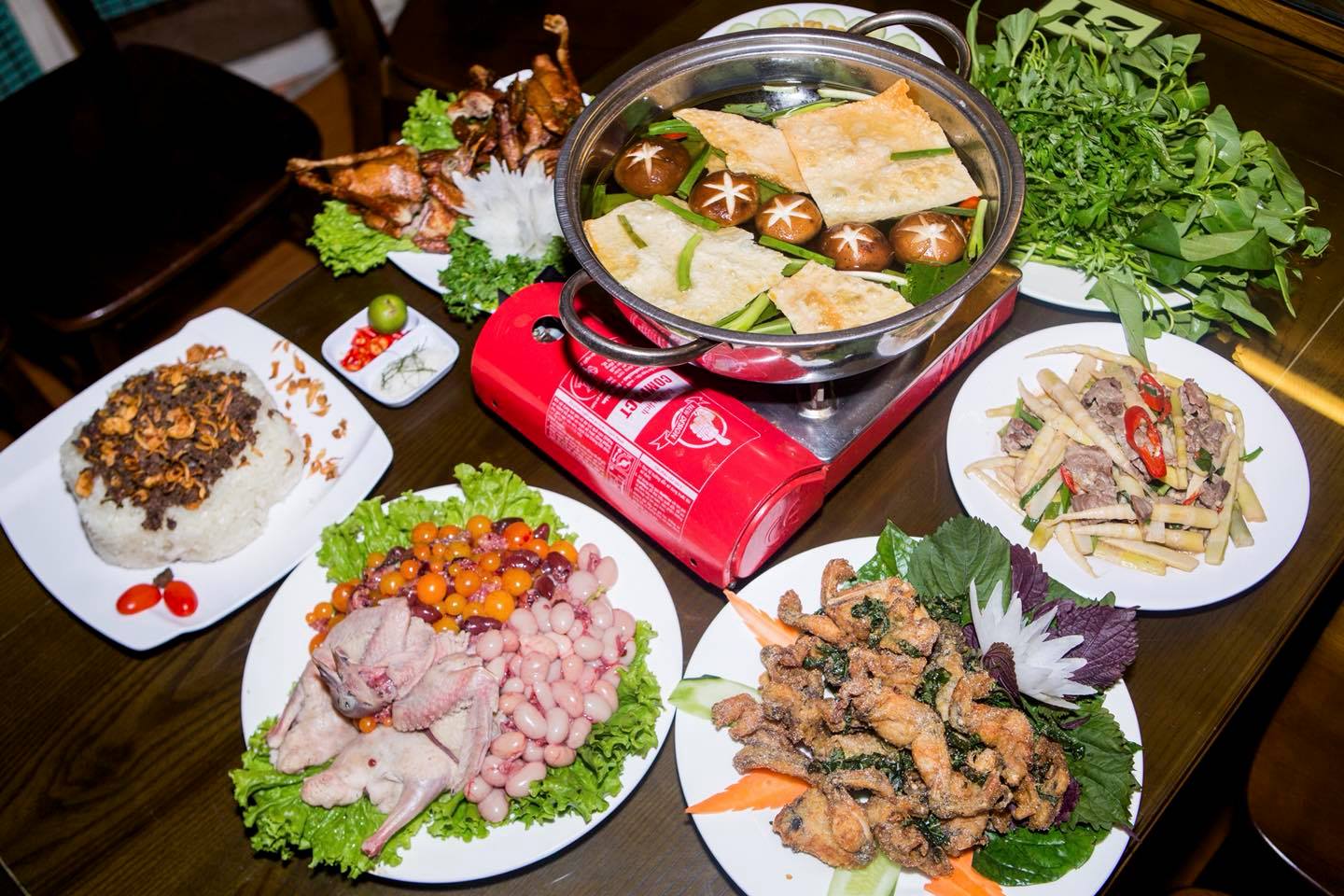 A rather unforeseen consequence of having too good of a dining menu at the local pub!

Nam Duong Tuu Quan is better known for its pigeon hotpot than for its selection of home-made liquors. As one may soon notice, a good number of patrons at 21 Hoe Nhai are female, which is very untypical for local pubs that are often crowded with overzealous male bingers. They do come for the birds!

The standing-out feature of pigeon hotpot is its broth of very liquid porridge, which has been long boiled with some birds earlier. Most other hotpots don’t use porridge, and that only makes for two birds with one stone. The hot steamy rice soup that has extracted that sweet essence of marrow, together with the white tender meat, blended in all the sense-awakening glory of various types of herb, vegetable and mushroom, make one wanting to swim in all that goodness, if it is not for the boiling bubbles that poke fun of the noses that can’t hold out far enough. Or at least wanting to gulp them all down!

Either way, it will probably be an experience one never forgets.

Four diners can chip in for an estimated total of 350,000vnd for one pot. We doubt you are going to eat so little though! 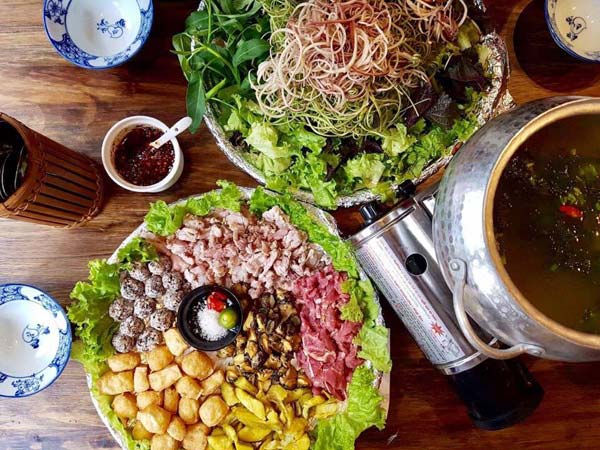 These are hard to come by in Hanoi, and when it does, the original is still the one that rules. The street stall in little Khuong Thuong alley, off Truong Chinh avenue, has been serving the exotic pot for over 40 years. That is the time when bombs still fly over both men and snails!

Besides the intriguingly hot and sour broth, snail hotpot also features some very interesting ingredients. There are snails (!!!), dumpling, wonton and roll, all made from the crawling creature. The hotpot also sees to the attendance of locally typical fried tofu, unripe banana and pork belly slices. They combine to make for an unmistakable dish of beautiful aroma and craving taste that is nowhere else to be found.

A pot will likely set the four of you back some 300,000vnd. It is definitely not cheap though, considering the thing is more or less a peasant’s food.

The fish and indeed the hotpot are rather common in the south, but it has only recently made way into the northern dining table. Mudskipper hotpot has a stable devoted fan base, but it is rare to come by in Hanoi, and thus fairly strange to some. One of the few restaurants that carry such is Mrs. Sau’s Hotpot, at 65 Van Cao. Come no further for an authentic taste, because even the name screams a southern accent!

The distinguished feature of mudskipper hotpot is the presence of the exclusive river leaves (Aganonerion polymorphum - editor), which add a lightly bitter yet strangely aromatic taste. Its broth is a mouth-watering sweet and sour mix. The mudskippers themselves are small but have soft texture and very tender meat. The fish often soak up with broth nicely, which makes for a compelling crave. The must-have vegetables that come with this hotpot is water hyssop and sliced banana flower. Water spinach has also proven to be a nice addition.

For VND 350,000 a steaming pot, this is fairly pricey, especially when the fact that it barely serves 2 persons each comes into account. But as one comes to think about it, as all the ingredients are shipped all the way from the southern land, it is a reasonable charge. 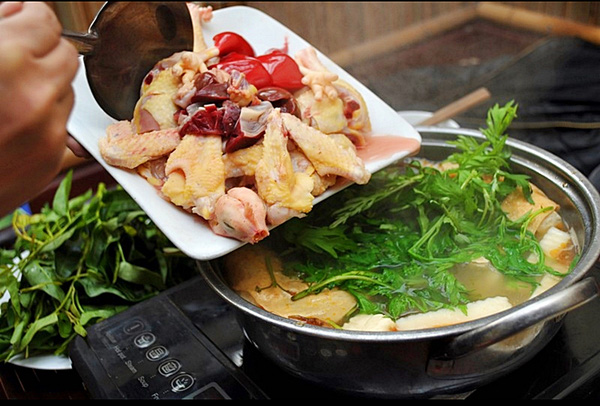 Itself being a typical sidewalk street shop with the so very typical menu of mostly chicken-deprived dishes, however the 52 Tran Nhan Tong restaurant brings about nice touches of uniqueness with really different takes on the classics. An example of which will be the chicken-in-vinegar hotpot.

The specialty at 52 Tran Nhan Tong is the hill chicken – free hill-roaming birds that develop tender, thick and juicy meat, with a full-textured skin that makes for a delicate taste never to be found in rubbery-skinned farmed birds. Many diners also complement the great broth. The owner proudly boasts of his recipe: “Other than the normal ingredients that come with every hotpot’s broth, we also add a special type of home-made rice liquor that is brewed exclusively for the purpose”. The myth stands uncontested, but 52 does indeed produce some extraordinary out the average ordinary chicken hotpot.

A pot for 5 to 6 persons should run for about 350,000vnd. The proud owner is a nice person to talk to, and the service is reasonably quick. 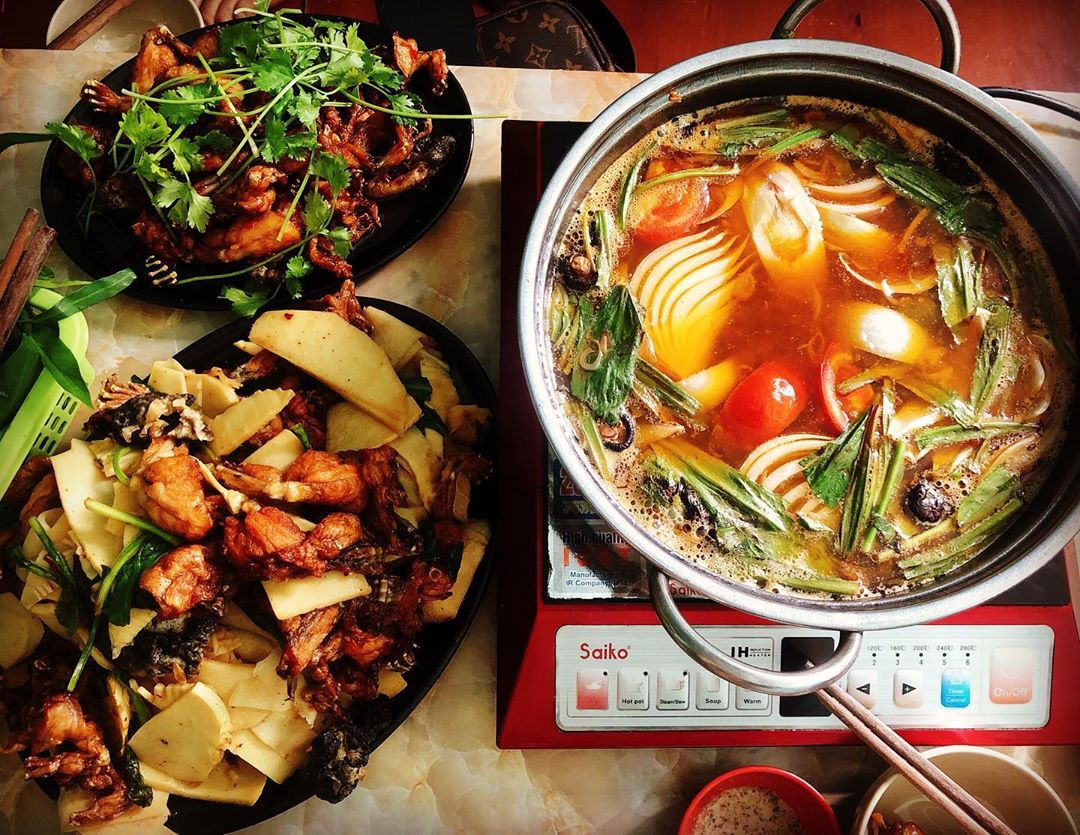 The small road that veers out of the famous Thanh Nien, runs the shore of Truc Bach lake, in which it takes its namesake from, is widely known for its now all too famous specialty. There are numerous vendors around selling frog hotpot, but Ngân Béo at 43 Truc Bach (Fat Mama Ngan – so named after the owner. Now take that!) is perhaps the most famous and also voted the best.

Frog hotpot is rather on the spicy side. It is much more labor-intensive to make, as the animal has to be carefully butchered and only a few of the cuts qualify for the honor of the boiling pot. The meat is deeply marinated and, as typical with other frog dishes, later half cooked with bamboo sprouts. Diners will dip the ingredients in the pot. A fine frog hotpot has a rich, deep and spicy flavor. The aroma is nose bleeding and the meat can hardly ever overcook. It serves with water spinach and sliced bamboo sprouts. The frog hotpot is one of the hottest most sought after in the winter days for many Hanoians.

A typical pot for two will run around 350,000, which is relatively high compared to other types. But its strong flavor, exotic ingredients and fine taste will leave diners soon longing to come back.

Caution: frogs are known to host a number of parasites that can severely affect human health. Make sure that you cook the meat throughout before eating. Also, customer service at Fat Mama receives some very unfavorable rating. The neighbors, even though rated a bit below Fatty when it comes to taste, invest more in customer satisfaction.