No one can deny that Dalat has a reputation as one of the most attractive cities in Vietnam, which can be accounted for by the fact that its architecture was the combination of French and Vietnamese style.

The Domaine De Marie (Dominion of Marie) Church is one example of that interaction between the two cultures. Today, it is not only a place for the local people to worship but also a destination for visitors from just anywhere. 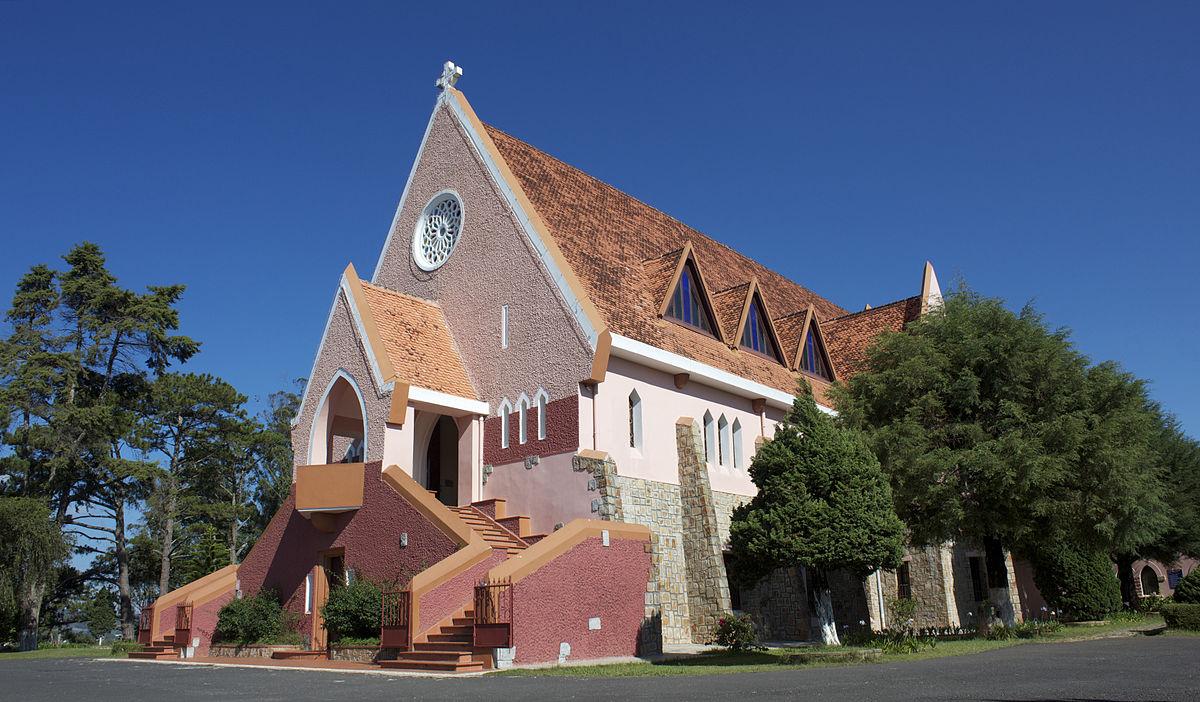 The Domaine de Marie Church, also called Mai Anh Church or Cherry Church, is home to the Roman Catholic nuns of the Mission of Charity. Actually, that's why many people think that there's a feminine charm attached to the architecture of the church. Located on a nice hill at 1 Ngo Quyen St., Ward 6, nearly 0.6 mile southwest away from the city center, it is a 29.6-acre architectural complex consisting of the main church and two convents. It offers a scenic panoramic view of the city. It was built from 1930 to 1943 following the 17th century French style. Before 1975, this is the main abbey with more than 50 female nuns, most of which are Vietnamese who carry out social activities like opening orphanages and kindergarten. However, because its architecture is the harmonious combination of Western art and Vietnamese folk art, the church definitely stands out from other ones created at the same era.

The façade of the building is designed as an isosceles triangle with many small arch-shaped windows, and a cross on the top. Right at the center of the façade is a grand rose-shaped window, a detail which usually appeared in the architecture of French church at the end of the 17th century. The walls are decorated with the Normandy style which allows creative manipulation of lights: dark-bright, solid-hollow, etc. The Vietnamese part, however, does not subside. 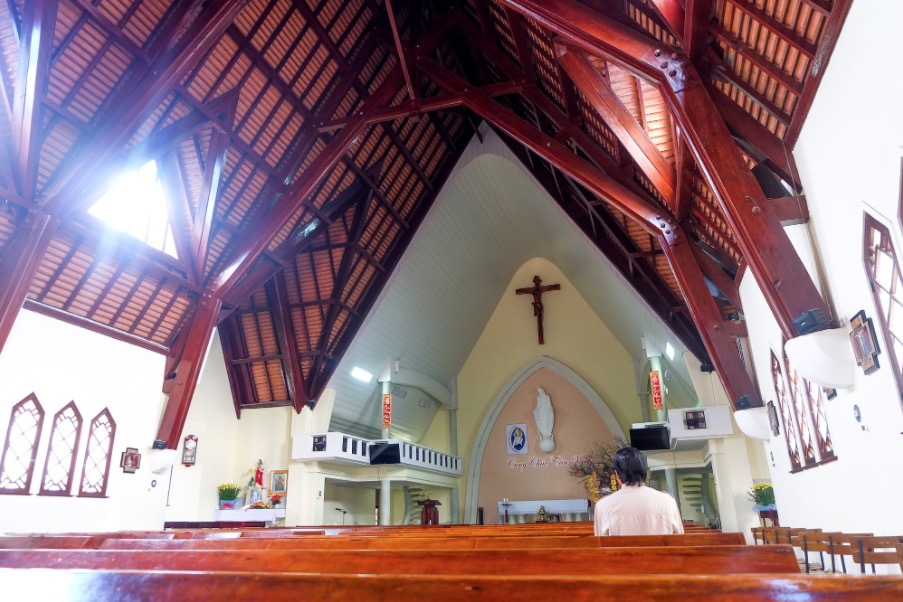 The Vietnamese arrangement of this church makes it special and different from the classical churches of Europe. The roofs of the church have their origin from the design of Nha Rong, a typical type of stilt house in Central Highlands, Vietnam. Even though the huge and steep roofs look pretty bland, the elegant stained glass windows make them a work of arts and illuminate the interior of the Domaine de Marie Church. The 3m-high-statue of Mary is another example of the interaction. It is created by a French architect named Jonchère in 1943, but resembles the image of a Vietnamese woman. This statue was a present from the Indochina governor's wife, who used to worship at the church and generously donated for the renovations of the construction. In fact, she was buried behind the church in accordance with her will. Also, the area behind the church is filled with beautifully blossoming precious Hai Tien flower blooming. 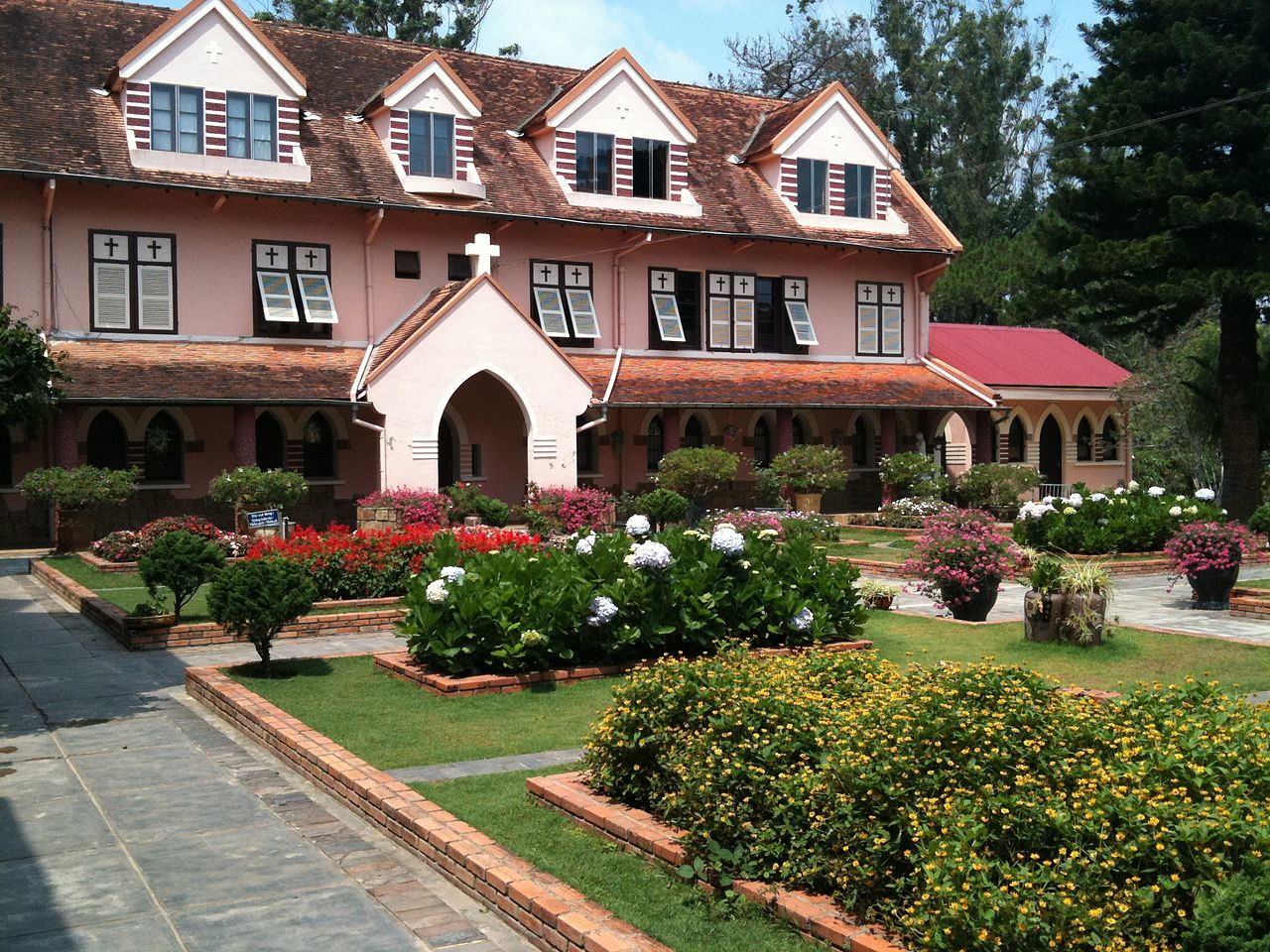 In general, though the combination of the two competing styles might seem unusual, it creates an absolutely creative and intrigue complex. If you need a change of mood for you Dalat trip, which is always assumed to be romantic and peaceful, make sure to pay a visit to Domaine de Marie to worship and experience the intersection of French and Vietnamese art for yourself.