Cau Ngu Festival is a one-day festival of Thai Duong Ha village in Thua Thien – Hue. It is organized in the 12th day of the lunar year to commemorate the God of the village called Truong Quy Cong who taught people to fish and trade.

From the afternoon before the official festival, people start their worshiping process, which lasts until midnight. A highly respected elder in the village leads the other members of the community thorough the process. All the owners of the fishing boat dress up in traditional black ao dais and white pants; they wrap a red scarf around their head. 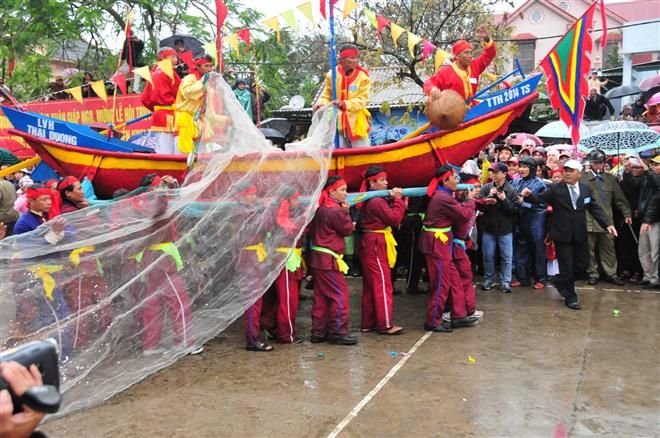 On the official day of the festival, one man will worship first to ask for good wishes from the God: good health, good business, etc. for the villagers. He wraps a drumstick in a red scarf and strikes three beats to begin the festival. On the temple’s garden, an elder man dressed in traditional costume gradually walks inside the hall. He is accompanied by two man wearing red scarves, who continuously pose humorous gestures. Then, there goes a long chain of drum beats and everyone gets into their position. Standing in front of the biggest altar, an elder person will throw money and the worshiped food onto the yard so that the children can wrap them. At the same time, the ship owners hold a small boat on their hands, running around the kids in the cheering background sound of blowing fire-crackers. The children are regarded as the “fishes” trying to escape from the net of the fishermen. The ship owners try to capture the “fishes” until they can catch some to worship the God of the village. After that, some “fishes” are brought to the seashore to wash in sea water while some other “fishes” are traded. People buy “fishes”; they bargain as if they are in a real wet market. After selling all the “fishes”, the ship owners gather at a chosen place such as the temple’s yard or a small pagoda to distribute the money happily. In the end, people get together again at the harbor to watch a boat racing competition.

This simulation activity and the festival as a whole are the way villagers commemorate their beloved God. Cau Ngu Festival has become not only an inevitable event but also an art performance imbued with the color of traditions. 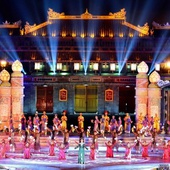