It can be said that anytime in a year is a good time to visit Ho Chi Minh City. Once called The Pearl of the Orient, Ho Chi Minh City is famous for its pleasant climate and rarely suffer from natural disasters like the Central or Northern Vietnam.

Ho Chi Minh City has two distinctive seasons, which is rainy and dry.

The rainy season, also known as the monsoon season, with an average rainfall of about 1800mm annually (about 150 rainy days per year), usually starts in May and ends in late November. During this period, although it will rain heavily almost every afternoon, the rain is short and clear quickly. Sometimes, you can experience sunshine and rain at the same time while the sky is still blue. Remember to bring the raincoat, in case your health is not very familiar with tropical downpour. Especially, in October, there will be extreme tide which may cause severe flood, so be well-prepared with wellington boots and water-proof backpack.

Dry season in Saigon lasts from December to April, is hotter than rainy season (with the temperature around 33 °C) and nearly has no rain. Although travelling in this period is more convenient, travellers need to be careful with heatstroke by avoiding going out at noon. 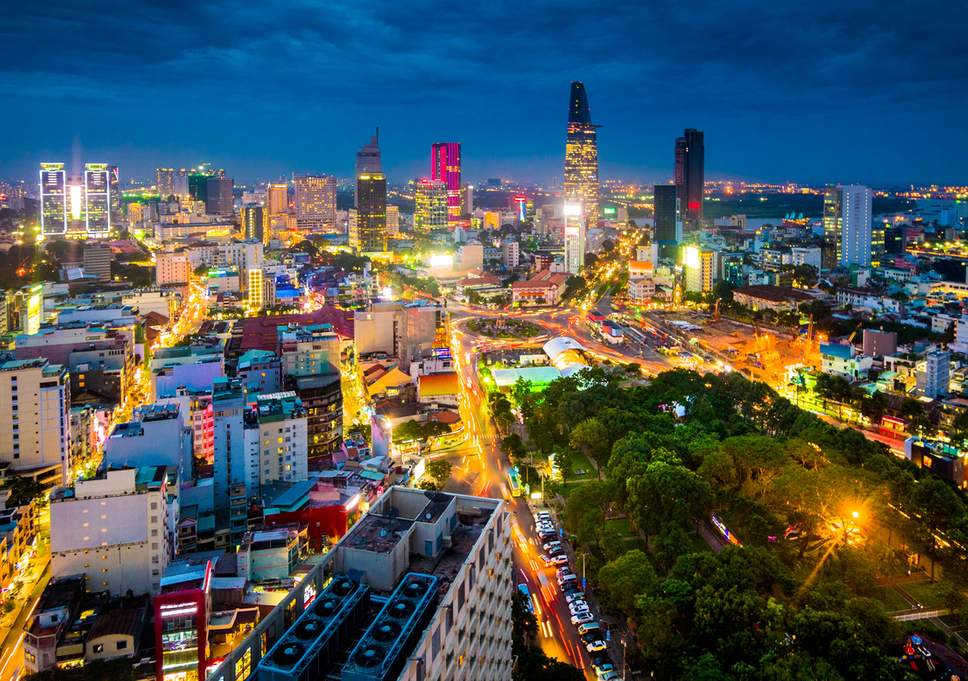 That leaves the best time to travel to Ho Chi Minh City from December to April, as it is the low domestic season and it does not rain often. The temperate is quite pleasant during this period as well, ranging from 22°C to 34°C. If you plan to come during this time, be prepared to join Tet festival (Vietnamese Lunar New Year), usually in late January or early February.

Generally, Saigon is warm all year, with the average humidity level of 75%, and average temperature of 28°C. In this city, a year is divided into two distinct seasons: rainy and dry season. Below is detailed monthly weather guide in Ho Chi Minh City:

January marks the beginning of the dry season in Ho Chi Minh City so the weather offers very little rain and a high number of sunshine hours. This kind of weather is opposite to the freezing cold winter in Hanoi. Average temperatures varying from 21°C to 32°C bring pleasure for locals and foreigners to enjoy the festive atmosphere of the New Year and Tet holiday.

With nearly 26mm of rainfall, divided in only 2 days, you’ll feel quite dry. Additionally, Ho Chi Minh City registers the average humidity level of 71% and the sun remains over the horizon for 8 hours each day.

As February is a part of the dry season, the weather in Ho Chi Minh City is rather warm and dry. The temperatures remain bearable for many international visitors with average highs of 32°C and lows of 22°C.

Relative humidity accounts for 70% paired with very little precipitation of only 10mm on 1 rainy day making February is the driest month of the year. The average sunshine peaks at nearly 9 hours per day that allows you a lot of time to explore this young and dynamic city.

Ho Chi Minh City in March is not much different from February as the weather is classified by moderate temperature and constant humidity. Average daytime temperatures have risen a little ranging from 23°C to 33°C.

Albeit in the middle of the dry season, the rainfall amounts for this month increases marginally to 15mm equivalent to 2 wet days. So there is still a possibility of catching light showers during your journey. Meanwhile, the moisture remains at a low of 70% so you may feel rather dry. As the sunniest month with nearly 272 hours of sunlight, Ho Chi Minh City during March also enjoys a burst of warm sunshine with nearly 9 hours each day.

April is often regarded as the transitional month between the dry season and the wet season. The temperature rises continuously with average highs of 34°C and lows of 22°C. In accordance with the increase in temperature, the relative moisture climbs to 79%. Therefore, Ho Chi Minh City this month is a little bit hotter and wetter.

In terms of rainfall, the whole city receives more occasional rains, resulting in higher precipitation of 50mm estimated in 5 rainy days. Additionally, with 12 hours of daylight, the sun will shine about 8 hours per day. April is also among months with the highest UV index.

May is the start of the rainy season in Ho Chi Minh City. This month features a fluctuating increase in average temperatures between 25°C and 35°C, high relative humidity, and heavy showers of rains. These warm, pleasant temperatures also mark the onset of summer in the whole country. May weather in Ho Chi Minh City is not just a bit hot; it’s humid with the moisture of 79%. In terms of sunlight, the sun shines brightly for around 6 hours on a span of 12 hours of daytime.

The precipitation amount increases dramatically compared to the previous month with 200mm falling on 12 rainy days. Expect those torrential downpours to be accompanied by occasionally thunderstorms and flood in the downtown.

Not only is June in the middle of the rainy season, but it also marks the start of the typhoon season in Ho Chi Minh City. This month, the city registers an average range of temperatures between 24°C and 32°C. This moderate temperature is a contrast to the harsh humidity of 83% making the weather very uncomfortable. The skies are mostly covered by thick clouds that reduce the hours of daily sunshine to 5.7 hours.

In June, Ho Chi Minh City is more prone to flooding due to torrential rains and frequent typhoons. About 325mm of rainfall is accumulated during 13 wet days. Strong storms are also often accompanied by thunderstorms and other miserable phenomena.

By July, the rainy season has kicked in throughout Ho Chi Minh City. The city shares a similar temperature range of June with average highs of 33°C and lows of 24°C. Likewise, the relative humidity remains high and constant at 83%. The sunshine lasts for nearly 5.7 hours each day to brighten the cloudy skies.

Albeit relatively high temperatures, the weather cools down quickly with plenty of short and sudden pouring rains. About 300mm of precipitation is accumulated on a total of 13 rainy days. July also poses several threats of fierce typhoons and afternoon tides that make major districts in Ho Chi Minh City overflow with water.

The August weather in Ho Chi Minh City is cloudy and stormy. Generally, you experience average temperature highs reach upwards 32°C and lows of 24°C. Yet, there is a little variation between daytime and night time. Not only is the climate rather hot but it also oppressive as moisture soars to 84%. In addition, cloudy skies are usually broken by intense sunshine for 5.5 hours over 12 hours of the day.

Heavy showers can drop any time as August typically reflects the rainy season at its peak. Sudden pouring rains last not too long but can be accompanied by thunderstorms. Ho Chi Minh City, as a result, receives over 275mm of rainfall falling over 12 wet days.

Hot climate and high precipitation characterize Ho Chi Minh City weather in September. Average temperatures range between 33°C and 24°C. The nights are cooler as the mercury drops by 1 or 2°C or more, especially during rainy days. Ho Chi Minh City this month is gentle with warm sunshine shining around 5.5 hours per day. By contrast, the relative humidity peaks at 85%, the highest figure of the year.

Although September in Ho Chi Minh City is close to the end of the rainy season, the expected amount of rainfall stands at an astounding 325mm accumulated over 21 wet days. Additionally, stormy and humid weather causes oppressive conditions.

In October, Ho Chi Minh City is a bit drier than the previous month with fewer rains and lower precipitation. The number of expected wet days reduces a half to 12 days while the estimated amount of rainfall witnesses a significant decrease to only 225mm. In addition, tropical cyclones can occasionally hit the city and streets are prone to be flooded. However, the city receives the same moisture of 85%, making the daytime more humid.

Ho Chi Minh City is rather hot this month, seeing average temperature highs of 33°C and lows of 23°C. Meanwhile, the sunshine hours register for about 6 hours each day.

Ho Chi Minh in November is noted for falling precipitation and cool weather. As the last month of the rainy season, only about 10 days of this month will see some rains with an estimated amount of 100mm, dropping nearly a half. The return of southwest monsoon brings typical winds that range from mild to moderate breezes.

The average daily temperature is 27°C that makes up highs of 31°C in the warmest part of the day and lows of 22°C. Meanwhile, the relative humidity remains very high at 81% so the atmosphere is fairly hot. In November, the daytime seems to be a bit longer with 6.7 hours of moderate sunshine each day.

December is officially the first dry month of Ho Chi Minh City. In stark contrast to the coldness of winter of the north, December weather in Ho Chi Minh City brings a moderately warm temperature range between 31°C and 21°C. Constant average temperatures paired with a lower humidity at 77% result in a more pleasant climate.

When it comes to rainfall, expect a considerable drop in accumulated precipitation to only 50mm on an average of 5 wet days. So it’s unlikely that you may experience a shower during your vacation. In addition to this, the biggest southern metropolis also soaks up warm sunshine for around 7 hours each day. 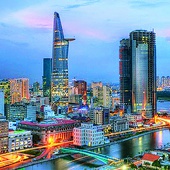 Do and Don't While You Are In Ho Chi Minh City

This tip sheet is a collection of both local perspective and foreign travellers’ opinions about what one should and should not do while in Ho Chi Minh City. 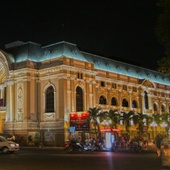 What To See In Ho Chi Minh City 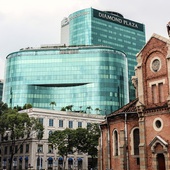 Things To Do In Ho Chi Minh City

Though Ho Chi Minh City is not as big as other cities in the world, there are a lot of things to do depending upon the length you can stay here.