Vietnam has one of the densest populations in the world. Data from 2009 census conducted by Vietnam’s General Statistic Office (GSO) indicates that Vietnam’s population density has reached the level of 263 people/km2 which stands at the 16th position on the list of 51 countries in Asia, and 3rd in South East Asia. In comparison with other adjacent countries, Vietnam’s density of population is twice as much as China’s (137 people/km2), about 3 times as much as Cambodia’s (78 people/km2) and 11 times as much as Laos’s (25 people/km2). The reason for this state of population density is massive increase in population while land resources is restricted. However in the future this rise can decelerate as birth rate in Vietnam has declined significantly in recent years. 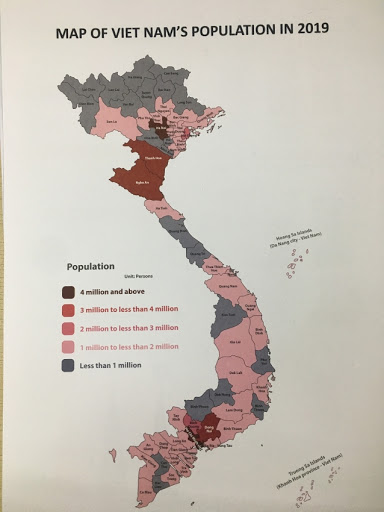 Vietnam population density also varies by zones with most of population concentrated in two largest agricultural centers of Vietnam which are Red River Delta and South Eastern – Mekong River Delta. Density of population in Red River Delta is higher than all other regions with 939 people/km2, followed by South Eastern with 617 people/km2 and Mekong River Delta with 426 people/km2. These regions are the most fundamental agricultural zones in Vietnam, as well as area where two biggest cities of Vietnam (Hanoi and Ho Chi Minh City) are situated, so it should not be surprised that they are the most crowded zones in Vietnam. On the other hand, Tay Nguyen (95 people/km2), Highland and Mountainous area in the North (117 people/km2) are the sparest regions in Vietnam as their terrain and climate is more extreme to live.