Unlike common population pyramids in decades ago with triangle form and large bottom, shape of Vietnam’s population pyramids in recent years has marginally transformed to have narrower bottom and expand in the center which represents the size of the labor force in the country. Statistic from Vietnam’s General Statistic Office reveals that proportion of people between 15- 64 years old and over-65 years old in Vietnam’s total population has rapidly increased by 12.4 (56.1% to 68.5%) and 2.1 (4.7% to 6.8%) respectively for 20 years from 1989 to 2010. 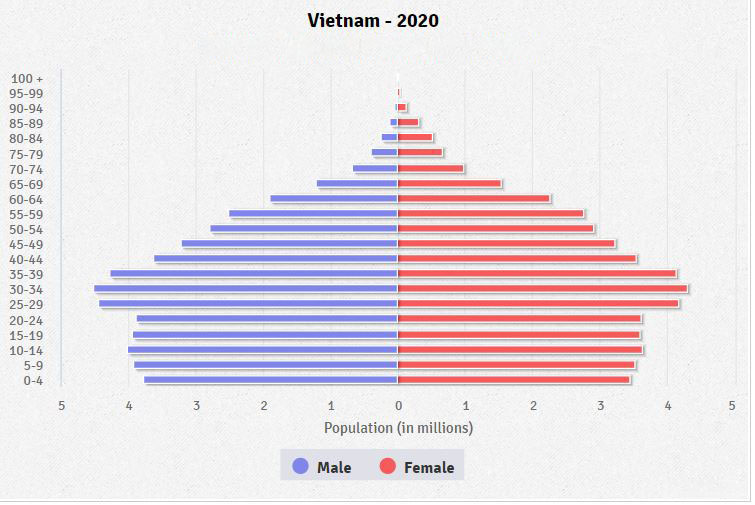 Also, aging index in Vietnamese population has quickly risen and almost doubled from 1989 to 2010 (18.2% to 37.9%). This demonstrates that Vietnamese population is getting older and older in a speedy acceleration. Explaining these changes in population pyramid are multiple factors. Significant deceleration in birth rate in recent years of Vietnam population is one of the reasons. Another reason could be attributed to higher life expectancy of elderlies in Vietnam due to better nutrition and advanced in medical care.

It can also be said that Vietnam possesses a suitable structure of gender in population. Sex ratio between female and male is kept at around 97.7 %, which means that there is 97 women per 100 men in Vietnam’s population. Difference in gender is more apparent at infant age (under 15) with more male children than female children, and also at over-65 age with reverse figure that female elder’s number is slightly larger than number of male elders. However,

Vietnam’s gender structure is rather askew towards males over females. One can see the evidence clearly by the relatively longer in size of the first 4 bars in the above pyramid. This is result of traditional beliefs to respect male more than female which has still influenced various region, as well as advance in medical technology that enables parents to easily “select” genders of their kids when these infants are not yet born.