The Mansion of Vuong Familiy

The house of Vuong Family, the king of Miao ethnic, is located in Xa Phin, Dong Van, and Ha Giang.

This mansion is impressive not because of its gigantic size, but its magnificence and unique design. As it was created by the Chinese stone artists from Yunnan (China) and the skillful Mong builders, the place’s design is influenced by the traditional architecture of the Qing dynasty in China in the late 1890s, as well as some element from the local Mong culture. This destination is a must-see that you should not skip on your tour in Ha Giang.

Located on a mountain with a tortoise’s back shape, this house was expected to bring wealth and prosperity to the owner because the turtle is one of the four sacred animals in the traditional Vietnamese legend (the four being the Dragon, Unicorn, Turtle and Phoenix). It was arranged with 4 horizontal and 6 vertical blocks divided into 2 floors and 64 rooms. The house was decorated carefully with images of sacred and respected animal such as lion, dragon, bat and phoenix to show the prosperity and wealth of the family. Around the mansion, there is a sturdy rocks wall which is 50cm in width, with a number of guarding towers and loopholes. This wall not only protects the family against the assault of enemies from the outside, but also forms a feeling of massiveness to the inner house. Outside of the mansion is the rock road that leads to the main entrance, and the tomb of the family. 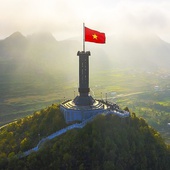 Unlike most people think, the northernmost point of Vietnam is not Lung Cu flag pole but a remote observation deck, which is approximately 30 minutes riding from the flagpole. 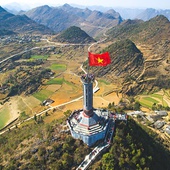 Lung Cu is located in Dong Van, 200km from the center of Ha Giang Borough with a natural area of 3,460 hectares. 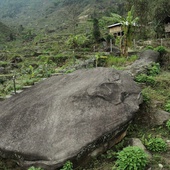 The old stone field of Nam Dan was discovered in 2004 by scientists from the Institute of Archeology and the Ha Giang Museum.